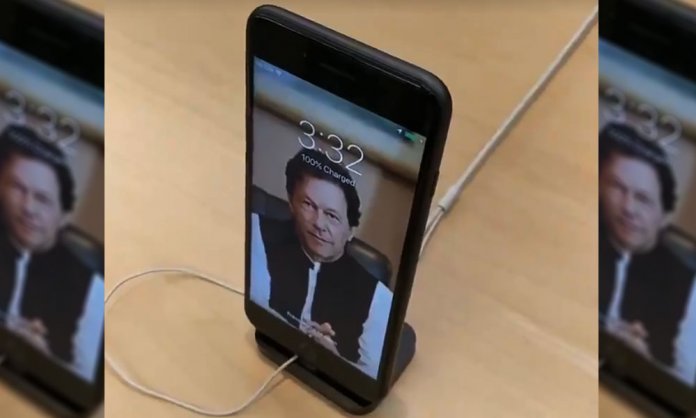 Someone in London has just shown their love and support for Pakistan’s Prime Minister, Imran Khan (IK)!

A video has gone viral showing 3 iPhones with the PM as their wallpaper! Although at this point it can not be said who gets the credits for this move, it shows that IK has supporters all over the world.

One thing is for sure that this certainly did happen as one of the iPhone’s screen reads ‘Open this app to see the pricing and compare models’.

An @Apple store in #London featuring Prime Minister #ImranKhan as the wallpaper in all #iPhones 👍👊#PMImranKhan #PMIKVisitsUAE #PrimeMinisterImrankhan #PMIK pic.twitter.com/Z8CsRLm2Pr

Earlier, Pakistanis took their love and support for the PM on Twitter after he clapped-back at United States President Donald Trump. PM Khan had hit back at Trump’s comments about Islamabad not adequately supporting the Washington-led “war on terror”.

Khan started the series of tweets by saying:

Record needs to be put straight on Mr Trump’s tirade against Pakistan: 1. No Pakistani was involved in 9/11 but Pak decided to participate in US War on Terror. 2. Pakistan suffered 75,000 casualties in this war & over $123 bn was lost to economy. US “aid” was a miniscule $20 bn.

3. Our tribal areas were devastated & millions of ppl uprooted from their homes. The war drastically impacted lives of ordinary Pakistanis. 4. Pak continues to provide free lines of ground & air communications(GLOCs/ALOCs).Can Mr Trump name another ally that gave such sacrifices?

Instead of making Pakistan a scapegoat for their failures, the US should do a serious assessment of why, despite 140000 NATO troops plus 250,000 Afghan troops & reportedly $1 trillion spent on war in Afghanistan, the Taliban today are stronger than before.

Trump’s false assertions add insult to the injury Pak has suffered in US WoT in terms of lives lost & destabilised & economic costs. He needs to be informed abt historical facts. Pak has suffered enough fighting US’s war. Now we will do what is best for our people & our interests

Have you done something similar at an Apple store? Share your stories with us in the comments below!