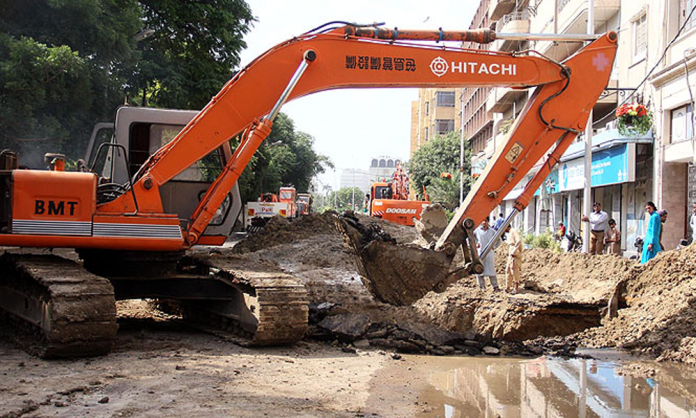 18th November 2019: Club road is one of the busiest roads in town which connects to the main business centers of the city.

Also popular for having hotels, restaurants and aviation offices, it witnesses massive traffic on a daily basis. However, despite just being re-constructed, the road is yet again drowning in sewage water.

Once again, the sewage water made its way back on to the surface, causing massive problems to travelers.

Construction had started on Club Road early morning today to fix this issue. However, the closing of the road has caused massive traffic at different diversion points across the area.

It is advised travelers to map their routes accordingly.

4th November 2019: This is just in! A part of the road in front of the Metropole Hotel has a huge sinkhole in mid-day, just a while ago. After recent rains, we have been experiencing the worst situation of the roads.

Club road is one of the busiest roads in town and connects to the main business center of the city. Also, there are major landmarks and hotels on this street.

With rush hour approaches we might be experiencing extreme traffic jams. It’s advisable to take an alternative route from I.I Chundrigar, Sadar, and Shahra-e-Faisal.

Just two months ago the whole urban life of the city was standard. The city faced the worst municipal crisis in history. The whole infrastructure collapsed and the citizens were barely surviving.

Section of the road caves in — in front of Metropole Hotel in Karachi – one of the city’s busiest thoroughfares pic.twitter.com/90aKVOatv1

As per the municipal budget 2018-2019, the city was allotted Rs.27 million for repair and development.

But we hardly see any maintenance or new development in the city. The mayhem caused by the rains exposed all the shortcomings of planning, management of the city. That is accommodating almost 8% of the country’s population alone.

This isn’t the first time when one of the major streets has been collapsed. Shahra-e-Faisal was drowned in just a few minutes’ rains and caused havoc.

After this incident, the city is in dire need of serious development and maintenance projects. For your assistance please take a look at the map before commuting to your desired location.

Stay tuned to Brandsynario as we will be updating the latest happenings.