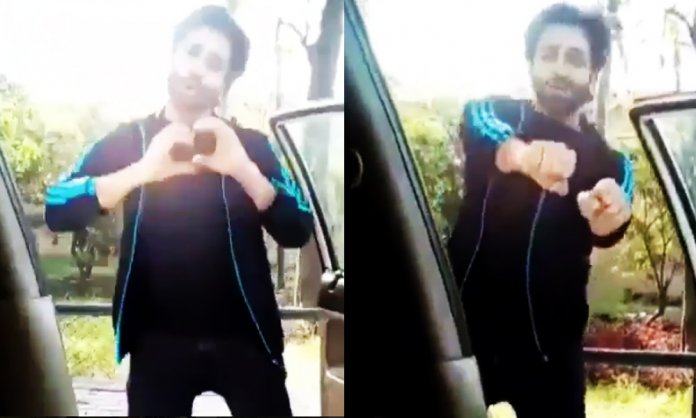 The latest trend of Kiki Challenge is taking the world of social media by storm. In the challenge, one has to jump out of a moving car and dance alongside it to Drake’s hit ‘In My Feelings’, as the vehicle keeps moving.

Some serious accidents have also been witnessed and few countries have already banned this latest craze.

Some international celebrities like Will Smith, Ciara, and Shaggy have also taken the challenge and people are going all gaga over them.

Last day in Budapest. I woke up #InMyFeelings I’ma Keep It 💯… I was TERRIFIED up there. That’s why my dance moves is all STIFF! Haha #InMyFeelingsChallenge #DoTheShiggy . Be smart, don’t attempt doing this under any circumstances. . 🎥: @jas @aidan @aaronjonferguson

The trend has caught up with the celebs in Pakistan as well. Recently, the Nazr-e-Bad actor Azfar Rehman has also joined in and posted his own video of leaping out of his moving vehicle and dancing.

Watch his video below!

There were many people who absolutely fell in love with his adorable dance steps including the Load Wedding actress Mehwish Hayat.

To which he replied!

But as usual, our celebrities always face online trolls no matter what they do.

Look at what people have to say about the video!

But since our celebs never feel embarrassed with such ridiculous and pointless comments, Azfar hit back to the troller in the sassiest way ever.

Azfer humbly replied to all the hater and admitted he was pretty bad at it!

In yet another post, he urged everybody to stay positive and not pay heed to those who bring you down!

No Negativity Please ! Stay Positive Dont let anyone put you down …. #LiveLETLiveAndEnjoy

Well, it was good to know that he did not pay any heed to haters and did what he loves to do.

Have you joined the Kiki challenge? Let us know in the comments section below.