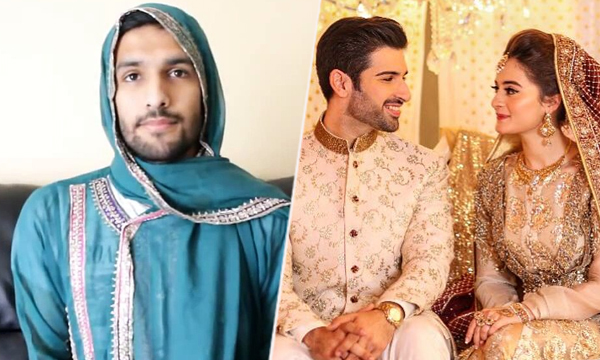 The newly-wed couple Aiman Khan and Muneeb Butt have been taking the internet by storm through their wedding pictures and are making headlines with everything they are doing.

The wedding ceremonies of the couple kicked off last week and they have so far hosted a number of lavish events.

So far we have seen photographs from wedding ceremonies including bridal shower, slumber party, dholki, Nikkah ceremony, a Filmy party, Mayun, that too after Nikkah, and many are scheduled in coming days.

Lollywood night would have been such an amazing event I wasn’t expecting, Thankx to all my friends for coming and making it memorable..😝 and yes my newly Mankoha” lol wifey it was all for u ❤️ @aimankhan.official

The couple shared a series of photos of the wedding extravaganzas on their social media handle and sending their fans into a frenzy.

Happy birthday to the queen of my heart @aimankhan.official. New life new beginning!

Each of their events was amazing which was graced by many celebrities as well.

However, many netizens, including a celebrity, are condemning the number of wedding events the couple has already hosted.

Yesterday, the famous Pakistan-Canadian comedian Zaid Ali took to his Twitter handle and took a subtle dig at the couple.

Without naming and shaming them, Zaid Ali said it all in his tweet and his fans were quick enough to get his savage hit at ‘Aineeb’.

Suprisinglt, the comedian has deleted the tweet right after for some reasons!

Moreover, Twitterverse also didn’t shy away from mocking the couple

Check out the funny memes and tweets below:

Scroll INSTAGRAM "#aineeb ki shaadi"
Scroll FACEBOOK "#AimanWedsMuneeb"
Like seriously guys? Are we gone insane? do not we have any other issue to discuss? Such immature attitude will become a serious threat to our tv/film industries. @HarPalGeoTv @arydigitalasia @Humtvnetwork

Couples like Aiman&Muneeb aka #aineeb are setting unrealistic standards of wedding for an already-complicated-society like ours where spending useless money on several events of shaadi is deemed flauntable. Please dont do this. Thr are many who cant even afford a basic wedding!

But that’s the beauty of Aiman Khan and Muneeb Butt’s relationship, isn’t it? They’re in love, celebrating each other, and don’t care about what people think!

We wish the couple a happy life ahead together.