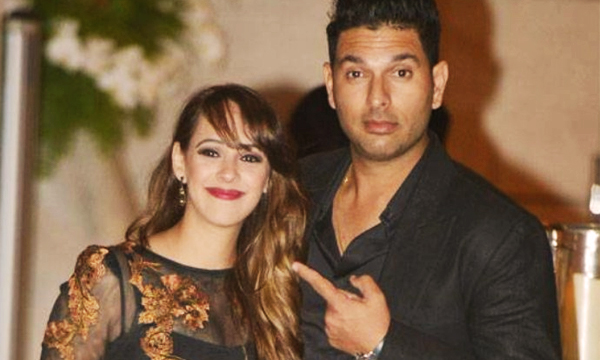 Wedding bells are ringing for the Indian cricketer Yuvraj Singh who is all set to tie the knot with the beautiful Hazel Keech. Smitten with each other, the couple got engaged in November 2015 and as per the reports by a popular daily, the duo is all for the wedding on November 30th at Yuvraj’s hometown. The reception is planned for December, first week.

According to an inside source, “The scheduled date of reception would be worked out between December 5 and 7. The wedding is happening on November 30.” The duo got engaged at Bali in a private ceremony last year but the wedding is going to be a big fat Indian wedding.

“Yuvraj has known Hazel for the last three years but started dating only three months before the engagement. Last year only, they announced that they would get married in 2016 winter,” added the source. Earlier, the couple posed for a romantic pre-wedding photo shoot for Harper’s Bazaar Bride magazine. The couple has planned a double marriage ceremony with both Sikh and Hindu rituals.

Awesome Moment Will you marry me @yuvisofficial to Ma'am @hazelkeechofficial

The couple had earlier revealed their honeymoon plans. “I want to go to Hawaii and surf, and Yuvi wants to go anywhere with a nice beach to be a bum–either Bora Bora or Maldives, and such,” said Keech.

Yuvraj revealed earlier who his best man will be. “I don’t have a choice; Angad Bedi has already appointed himself my Best Man,” says Singh. “I will have my sister Tina Keech-Henderson, and my best friends Bruna Abdullah and Insia Lacewala as my bridesmaids,” said Hazel.

Yuvraj Singh will be representing his team on the big day as well at the Ranji Trophy games, a source revealed. “He will continue to represent his state team Punjab to earn his place back in the national team. He is very much in the reckoning.”

Save the date ladies and gentlemen!