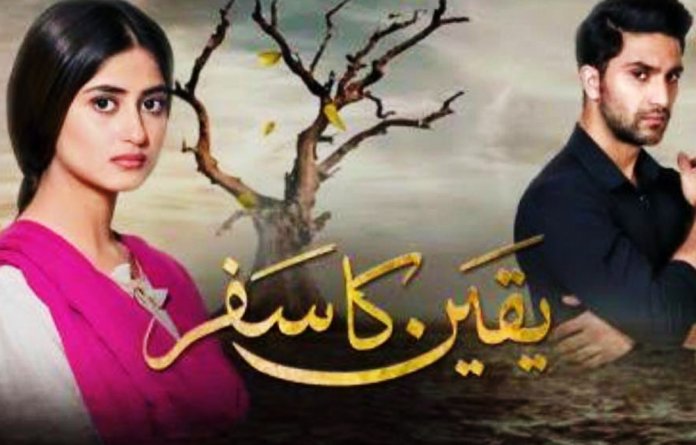 Just one day left till Yakeen Ka Safar airs its last episode and we can not wait for the grand finale! Hum TV’s ground-breaking drama has stolen the spotlight and is even being compared to the likes of unforgettable dramas like Humsafar and Zindagi Gulzar Hai.

With its tale of blossoming romance, heartbreak, and tough social issues, the drama has won over its viewers since its first episode.

AND NOW THE GRAND FINALE HAS US ALL EXCITED!

The Yakeen Ka Safar devotees are on the edge of the seats as they are afraid the drama will have a tragic end! Surely, we all want Dr.Asfi and Zubia to live happily ever after.

Both of the characters lived a tough life and struggled through adverse times to reach where they are today! Hence, nobody wants another Pyaray Afzal happening with their love story.

But Our hearts sank when we saw the drama’s jaw-dropping promo for the last episode!

Fans are now afraid Zubia will die and Dr. Asfi will be left forever alone.

As per the book, their wedding will surely be postponed.

But the ending is bound to make everybody rejoice.

The question is if the drama’s story will have the same end as of the novel!

Now another spoiler alert has surfaced claiming that Dr.Asfi will marry Faryal in the end!

Already we are freaked out because Ahad Raza Mir has hinted about a tragic end.

So anyone else basically dreading YKS ending?

Hum TV has announced a prize for the person who will guess the ending right.

The wait will kill us. Nevertheless, let’s keep our fingers crossed and wait for the grand finale.