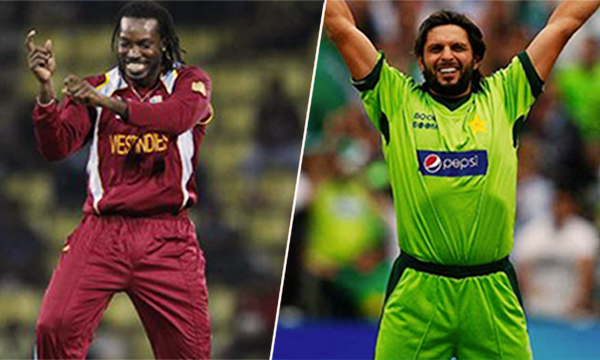 Chris Gayle smashed a century and Shahid Afridi rediscovered his boom with the bat as the veteran destroyers powered the West Indies and Pakistan to victories at the World Twenty20 Wednesday.

Gayle struck 11 sixes at Mumbai’s Wankhede Stadium in a 47-ball century as the West Indies comfortably chased down England’s total of 182 for six with 11 balls remaining in their tournament opener.

Afridi starred with bat and ball as he skippered Pakistan to a comprehensive 55-run victory against Bangladesh in Kolkata, drawing a line under his team’s troubled build-up.

Both men had faced some hostile headlines in recent weeks and they revelled in their triumphs, with Gayle saying he had been on a mission to entertain his team-mate, Sulieman Benn. Gayle triggered a firestorm in January when he asked an Australian TV presenter for a date live on air during the Big Bash League.

But in his post-match TV interview after Wednesday’s innings, he said his “fantastic” innings was designed to impress his drinking buddy Benn.

“Before I went out Sulieman said you’re going to ‘entertain me’,” said a beaming Gayle after hitting the third fastest international T20 century.

“I wanted to entertain my team-mate — he’s my drinking partner as well.”

After his blistering 19-ball 49 helped Pakistan post a commanding total of 201 for five, Afridi took two key wickets in a tidy spell that helped limit Bangladesh to 146 for six from their 20 overs.

A relieved Afridi, accused in some quarters of being a “traitor” for saying he received more “love” from Indian than Pakistani fans, said he was proud to have led by his example.

“It’s a big event and I thought I should take responsibility as the captain,” Afridi said after being named man-of-the-match.

While his batting pyrotechnics once earned him the nickname “Boom Boom”, Afridi has endured a torrid time at the crease in the last couple of years and some observers felt his ability to play a match-winning innings had gone for good.

But after promoting himself to number four in the order, Afridi smacked four boundaries and four sixes to help Pakistan register their second highest score in T20s.

“I was hungry. I was keen to perform well for my country… As a senior player, I had to lead by example,” he said.

Little had gone right for Pakistan in recent weeks. After a dismal showing in the Asia Cup, they had to delay their departure to India for the World T20 in a row over security. But everything fell into place once Afridi stepped onto the Eden Gardens surface where he won the toss and opted to bat.

He was soon vindicated when Ahmed Shehzad (52) and Mohammad Hafeez (64) hit entertaining fifties to stitch a 95-run second wicket partnership and lay a solid foundation for others to build on.

Bangladesh was never really in the hunt and got off to a dreadful start when opener Sarkar was bowled by Mohammad Amir with only the third ball.

The in-form Tamim Iqbal and Sabbir Rahman put on 43 for the second wicket, but they both fell victim to Afridi and Bangladesh’s chase fell away.

Amir, on the comeback trail after serving a prison sentence and a five-year ban for spot-fixing, ended with impressive figures of 2-27.

All-rounder Shakib Al Hasan put up some resistance, top-scoring with an unbeaten 50, but his knock never looked like altering the outcome.

The match in Mumbai turned out to similarly one-sided with England’s score proving to be well within the reach of the West Indies.

Joe Root top-scored for England with a tidy 48, including two exquisite sixes, off 36 balls.

A late flurry from England skipper Eoin Morgan and Jos Buttler gave their innings a bit of momentum at the end. But Morgan admitted that England had hoped to put 200 on the board before Gayle let rip.

After a relatively quiet start, Gayle hit two consecutive sixes off spinner Adil Rashid in the ninth over as the West Indies sat at 85 for two at the half-way stage of their innings.

Gayle, 36, then repeated the feat against Ben Stokes in the 11th as he single-handedly took control of the Windies’ assault.

“With Chris’ experience it was easy really in the end,” said West Indies captain Darren Sammy.