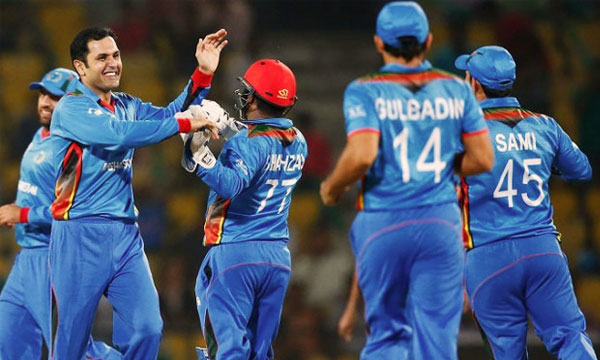 Spinners Mohammad Nabi and Wellington Masakadza helped Afghanistan and Zimbabwe register contrasting wins in the World Twenty20 Thursday as the two teams set up a Group B decider to make the Super 10s.

Rocked by a fixing controversy prior to the start of the tournament, Hong Kong’s campaign in the sixth edition of the World Twenty20 has ended after two consecutive losses.

Electing to bat, the Hong Kong batsmen stumbled to 116 for six in their 20 overs, a score which Afghanistan were able to surpass in 18 overs.

In-form Mohammad Shahzad and Noor Ali Zadran provided a solid start for Afghanistan and despite a few hiccups the Asghar Stanikzai-led side still looked like favourites to make it to the next round.

“I am very happy with my performance — my best figures in a World Cup,” man of the match Nabi said at the post-game presentations.

“The pitch conditions were slow and I decided to use my variations.”

Choosing to bat, Zimbabwe suffered from regular dismissals but Williams’ 36-ball 53 enabled the side to post 147 for seven, a score which proved enough against a brittle Scotland batting line-up.

Skipper Hamilton Masakadza gave the new ball to his brother Wellington, who combined with medium-pacer Tendai Chatara to help dismiss Scotland, who slipped to their second loss, for 136 in 19.4 overs.

Zimbabwe though had a terrible start after a mid-pitch collision between the openers which resulted in the run out of Hamilton and an injury to Vusi Sibanda’s chin.

But Williams did well to drive Zimbabwe to a respectable score with some support from the lower-order batsmen.

Zimbabwe and Afghanistan are now in a direct tussle to top their group when they clash Saturday in order to make the Super 10 cut.

“This has been a long time coming. I am trying to help my team qualify. I tried to pick up wickets and put them under pressure early on,” said Wellington Masakadza, who finished with 4-28.

Hamilton Masakadza knows that Saturday’s clash with Afghanistan will be a tough encounter after the Asian side clinched a series win against them on African soil last year.

“We have been playing well. The guys are gelling and are believing a bit more. We are looking to turn things around against Afghanistan,” he said.

Oman will play Netherlands while Bangladesh meet Ireland in the two Group A matches on Friday.