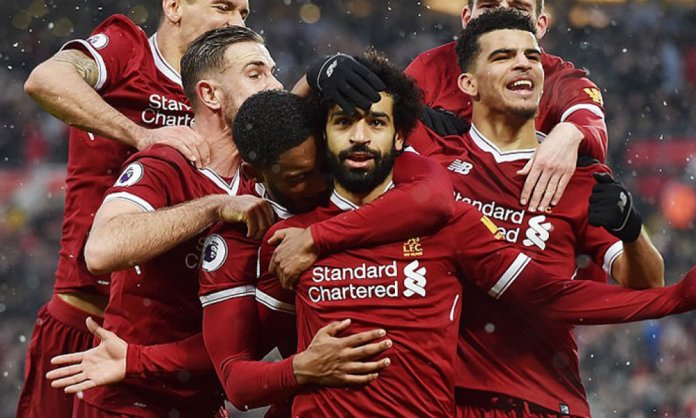 Mohamed Salah is in a high-profile race to be fit for Egypt’s World Cup opener against Uruguay on Friday and even opponents are hoping the Liverpool ace could yet play a role in Russia.

The striker and Egyptian superstar, who is nursing an injured shoulder, is crucial to the north African side’s hopes of making it out of a weak-looking Group A also featuring the hosts and Saudi Arabia.

Egypt plays Uruguay — tipped by some to be dark horses — in Yekaterinburg in just the second game of the tournament, following Russia against Saudi Arabia in the opening match.

Salah, who turns 26 on the day of the game, gave 100 million frantic Egyptians a massive boost on Wednesday when he joined a squad training session at their Grozny base.

He had been sidelined since suffering a shoulder injury in Liverpool’s Champions League final loss to Real Madrid on May 26, casting severe doubt on his World Cup participation.

He went through a range of warm-up exercises with his team-mates, but Egyptian team officials are giving little away.

“There’s a good degree of progress but no definitive decision on whether he takes part, as we are following his case day by day,” team director Ihab Lahita told reporters.

Egypt’s 62-year-old Argentine coach Hector Cuper will conduct a pre-match press conference on Thursday, but there are suggestions that he wants to see Salah train again before making any decision on whether the player is fit to face an Uruguay side boasting the twin attacking threat of Luis Suarez and Edinson Cavani.

The most likely outcome is that Salah, one of the outstanding players in the world this season as he helped propel Liverpool to the Champions League final, will be on the bench on Friday.

Salah’s World Cup dream was left on the brink when he exited the final in tears after Real Madrid skipper Sergio Ramos wrestled him to the ground.

Cuper has attempted to dismiss the notion that Egypt are a one-man side, but with 44 goals in all competitions this season for Liverpool, Salah’s badly timed injury has become a national obsession back home.

Salah is regarded as a contender for the Ballon d’Or for his spectacular debut season at Anfield, alongside Argentina’s Lionel Messi, Portugal’s Cristiano Ronaldo and Neymar of Brazil.

The tournament in Russia will be the poorer for Salah missing out and Uruguay goalkeeper Fernando Muslera has expressed hope that Salah will play against the South Americans.

Egypt, a no-frills side who play on the counterattack under the wily Cuper, face hosts Russia on Tuesday and the Saudis on June 25 in their last group game.