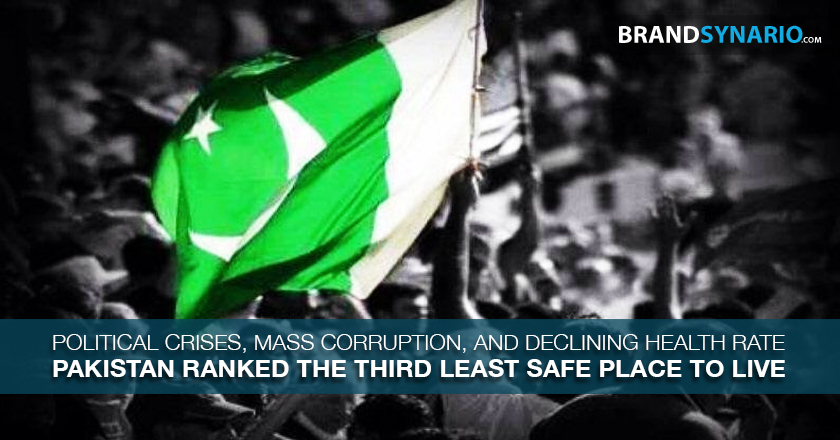 67 years of existence – the sixth most populated nation – and yet, we still stand as a the third least ‘safe’ place on Earth to live, Global Competitiveness Report 2014-2015 reveals.

The Global Competitiveness Report evaluates the competitive landscape of 144 countries, providing insights about the pivotal factors affecting their productivity and prosperity.

The report  is considered as the most authentic assessment of national competitiveness worldwide.

Basing their decision on Pakistan’s fragile security situation, the World Economic Forum has placed Pakistan at 142 among 144 nations, followed by Libya and Yemen.

The report stressed the already evident and prevailing social political and economic issues, highlighting facts that public institutions in Pakistan are controlled by bureaucracy and corruption.

Also, lack of property rights protection is emphasized in the report

Sadly, amongst all the South Asian countries, Pakistan is placed at the bottom most position; countries like India, Sri Lanka, Nepal, Bangladesh and Bhutan are ranked above Pakistan.

The report also emphasizes upon the shakiness of policies, lack of financing and government flux as other imperative causes derailing the business environment in the country.

As for the conditions of electricity supply, Pakistan ended amongst lowest eleven countries and stood at 133.

The report identifies corruption as the key element which is damaging Pakistan’s image. Likewise, favoritism by government officers is obvious and the country in this regard is placed at 101.

Due to a lower inflation rate and a lesser budget deficit relative to last year, country’s macroeconomic state has upgraded marginally but yet it is still a drab and stand at 137th rank. Pakistan on the basis of infrastructure was ranked at 119 among the 144 nations gauged.

Furthermore, Pakistan’s performance on issues regarding health and education is still the worst among all the countries evaluated.

Pakistan also has one of the lowest literacy rates in the world and is placed at 132. The GCR specified that almost a quarter of children do not go to primary school.

Pakistan’s labor market was rated at 132, also female participation in the labor force is the world’s fifth lowest at 140.

On the technological grounds, the potential of information and communication technology is not sufficiently leveraged, and stands at 114.

On the brighter side of a dark situation, the country performed relatively better in the more advanced areas such as financial development where it was raised to the 72 rank and 81 on the business sophistication pillar.