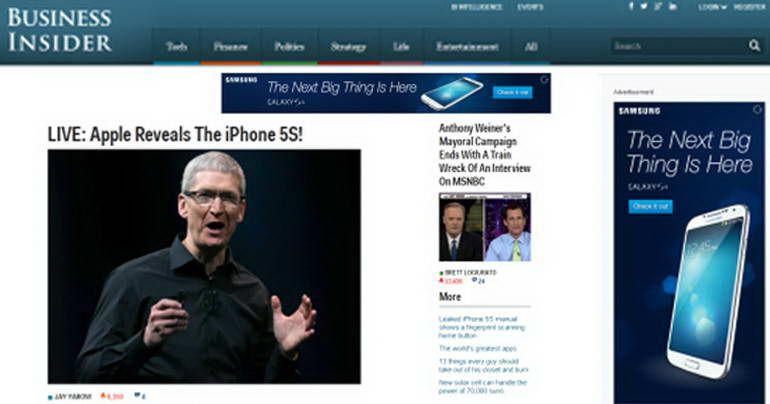 The Smartphone industry experienced a drama as Apple’s latest iPhone launch was bombarded with Samsung advertisements on various websites and blogs. In some instances the live online coverage was sponsored by the rival brand, Samsung, itself.

Samsung bought banners on different popular websites such as The New York Times, Bloomberg, The Verge and even Business Insider which were covering the iPhone launch.

It was disconcerting to see Samsung S IV on the top and side banners, with its slightly altered old tagline ‘The Next Big Thing is Here’, while reading about the release of iPhone 5S and 5C.

The brand has spent an estimated $880.2 million on advertising alone in the US last year.

In addition to this, Samsung has also sponsored live coverage of Apple’s events on various blogs. One such avenue was ‘The Hive’ section on Business Insider that is usually sponsored by Samsung and this time too was sponsored by it while it covered the iPhone’s launch.Motorola also didn’t stay away from limelight and promoted their Moto X on home pages of Wired and Ars Technica on Apple’s big day.

Motorola also didn’t stay away from limelight and promoted their Moto X on home pages of Wired and Ars Technica on Apple’s big day.

LG also made its presence felt on the day of Apple’s event, in an attempt to boost their LG G2 Smartphone.  T-Mobile sponsored their share of the event on CNET, to promote their ‘Jump’ program, which gives you the ability to swap phones twice a year, giving away your old for new at just $10.

Instead of shying away, competitor brands rose to the occasion and tried to enhance their brand recall and reach on the day which was otherwise dedicated to Apple iPhone