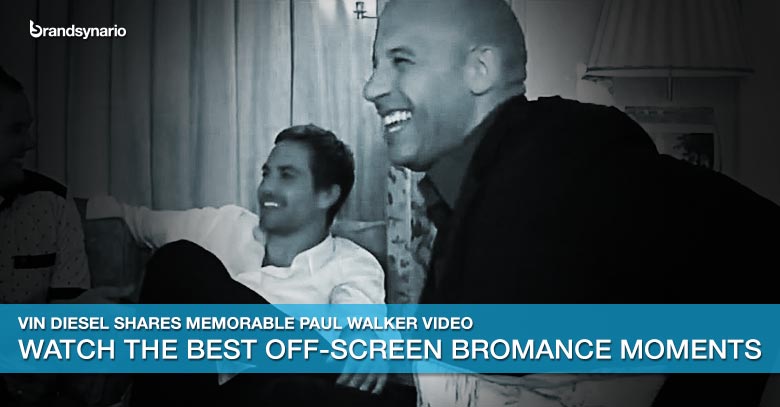 <p><strong>&ldquo;I had to punch a wall, to feel like a man again&rdquo;</strong>, said every man who watched this video that Vin Diesel shared on his facebook that showcased his friendship with late Paul Walker.&nbsp;</p>
<p>Anyone who has watched any of the six Fast &amp; Furious movies, knows the relationship that <em><strong>Don (Vin Diesel) and Brian O&rsquo;Connor (Walker)</strong></em> share. The two actors made Don and Brian the characters they are today, it couldn&rsquo;t have been possible without a friendship that goes beyond movie sets.</p>
<p>The 18 minute video includes Vin Diesel&rsquo;s interactions with Walker over the years. It&rsquo;s private, funny and understandably sad. The two seems to have developed the same relationship, they have had publically exhibited &ndash; they really were best friends.</p>
<p><embed frameborder=”0″ scrolling=”no” src=”http://tune.pk/player/embed_player.php?vid=1781342&amp;folder=2014/01/08/&amp;width=780&amp;height=422&amp;autoplay=no” height=”422″ width=”780″></embed></p>
<p>As for the video; Vin Diesel had hinted earlier, that he has<strong> &lsquo;some special plans&rsquo;</strong> for his Facebook followers on the occasion of crossing the 60 million mark. Diesel</p>
<p>Vin Diesel posted this video with a caption that read:</p>
<p><strong>”You have always been so supportive, especially in these past two months&hellip; So, I wanted to share something personal that I worked on through the New Year, in honor of my brother Pablo&hellip; Paul”</strong></p>