Home Articles Watch Pakistan vs. Australia T20 International 2014 – The Game Is On!
Advertisement 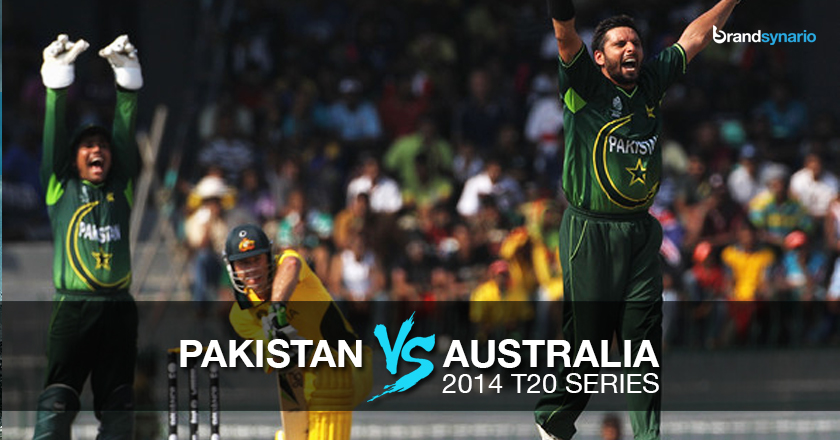 Under the stewardship of new T20 captain, the effervescent superstar, Shahid ‘Boom Boom’ Afridi, a seemingly resurgent Pakistani side look to put their woeful World Twenty20 performances in Bangladesh behind them and host a youthful Australian side, who themselves are playing under the new captaincy of Aaron Finch.

Pakistan, T20 champions in 2009, face the next generation of Aussie cricketing talent in the only T20 International game of Australia’s tour to Pakistan’s home territory of the Middle East.

The Aussie Kangaroos are in the process of building a team that would compete on all fronts in all forms of the game, i.e. Tests, One-Day, and T20, for the next ten years. However, amidst a technical bowling crisis in the Pakistani camp following the imposed ban on Pakistan’s most successful bowler in the T20 format, Saeed Ajmal, due to his ‘illegal’ bowling action, Afridi is in quite bullish mood for the match.

Speaking to the media prior to the game, Afridi said he had no problems with the Pakistani bowling attack, with young left-arm spinner Raza Hasan coming in the side to fill in for Saeed Ajmal. “We all know the importance of Saeed Ajmal very well, but I’m very confident on the guy Raza Hasan,” Afridi said.

“As a captain if I look at my bowling line-up, I know we’ll miss Ajmal but we have a very good bunch of guys. So I’m very confident about the bowling line-up. I’m very positive about Raza Hasan, he is a very talented guy and we have some other guys as well who will play in the one-dayers as well. I’m fine with our bowling, I have no issues.”

Raza Hasan, who has 7 caps for his country in this format of the game, will be assisting Afridi and former captain, Muhammad Hafeez, in the spin-department for Pakistan.

Aaron Finch, on the other hand, could be forced to start off his T20 captaincy career without the services of leg-spinner Pat Cummins, who is officially allowed to play for his club, the Kolkata Knight Riders, in the CLT20 Final on Saturday.

However, big-hitter Glenn Maxwell is available and, in all likelihood, is set to start for the Aussies. Shane Watson, who was earlier named in the squad, has withdrawn from the T20 game, possibly due to injury.

Pakistan and Australia have previously played 12 T20 games against each other, with Pakistan winning on seven occasions, while the Aussies have won only four, with one game tied. Their last encounter was at the World T20 2014 in Dhaka, a game which Pakistan convincingly won by 16 runs.

Both of these teams are filled with extremely talented individuals, many of whom can single-handedly win matches for their teams.

Not only an entertainer, a technically-gifted batsman and a very handy spin-bowler, Maxwell is a bowler’s nightmare when on-form.

What can be said about this legend that has not already been said? His power hitting, brilliant leg-break bowling, electric fielding, and trademark celebrations are absolute joy to witness. Even his frustrating inconsistency is sometimes quite entertaining!

The man credited with the creation of the improvised ‘switch hit’, David Warner is a consistent opening batsman, and an ever-present figure in the Australian team. He ruthlessly punishes any loose deliveries and the bowlers need to be at their absolute best to thwart his threat away.

‘The Gentle Giant’ always plays with a smile on his face. His 7’1” frame enables him to hit the pitch hard and produce extra bounce that puts batsmen into a world of trouble. His presence resonates a calming aura that is generally not associated with pacey bowlers.

Australia’s Mr. Reliable in the past two years, James Faulkner is a bowler who can bat exceptionally well. His power-hitting and medium-fast bowling are threats to any team he comes up against.

It has been quite a long time since Pakistan’s last international series took place. This T20 game will be followed by three ODIs and one Test match, and it could set the tone for the rest of Australia’s tour to Pakistan’s ‘cricket home’ in the Middle East.

Let the team from Down Under feel the heat against Team Green in the deserts of the Middle East!

What will be the outcome of the T20 International? Will Shahid Afridi prove to be a great captain? Can the Pakistani team beat this young Australian team? Have your say in the comments below.