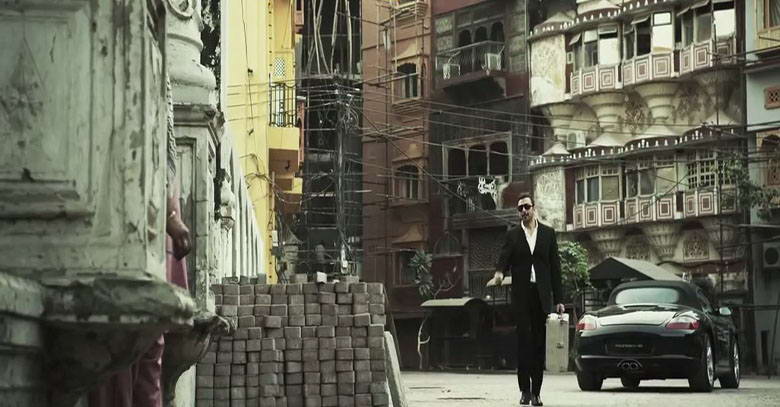 The Pakistani theatrical gemstone of the year, WAAR made its first cinematic appearance last night in ATRIUM cinemas, Karachi. WAAR is a 2 million dollar project directed by Bilal Lashari and distributed by Mind Works Media and Mandviwalla Entertainment. The movie released its action packed theatrical trailer way back in 2011. Ever since then, it had been the talk of the town with its impressive camera shots and visual treats. The action thriller, which according to the producers is ‘based on the actual events’, has Shan Shahid cast in the lead role, along with Ayesha Khan, Meesha Shafi and Ali Azmat.

Shamoon Abbasi, who plays the role of the main villain in the movie, is a renowned actor-turned producer who made his name in the television industry. The movie is announced to hit the box office on 16th October.

The plot revolves around Major Mujtuba played by Shaan Shahid – A special agent who retires from saving the ‘day’ after a personal calamity. Nonetheless when a furious terrorist, Rammal (Shamoon Abbasi) is unleashed upon the country to plot one of the biggest acts of terrorism, Mujtuba is called in again to save his country. Assisting him are the country’s favorite counter-terrorist brother and sister duo, played by Ayesha Khan and Hamza Abbasi.

Ali Azmat also makes a rather special appearance in the movie as a righteous politician Ejaz Khan entranced by the diva, Zoya played by Meesha Shafi. The movie revolves around these characters, as Bilal Lashari exhibits his commendable skills behind the camera. Umar Garcia undoubtedly has created the country’s finest visual effect.

The screenplay throughout the movie is far better than any of the best motion pictures from the other side of the border. As for the acting, Ayesha Khan and Meesha Shafi carried out decent enough roles but as always it is the incredible natural acting skills of Shaan Shahid that mesmerized the audience as he fit into the character so convincingly. Rising star Hamza Abbasi played the role of Ehtesham, a young and valiant police officer who leads his men with bravery and charms the audience with his seemingly adorable acting. Ali Azmat, chips in with his surprisingly original style in acting and carries out a reasonable performance.

Certain scenes in the movie leave the audience feeling ‘awe struck’, not because of the storyline or the acting but for the placement, dialogues and again, visual effects. The first half of the movie exhibits the director’s ingenuity, visual effect craft and soundtrack excellence, BUT the storyline seems to lag behind at times. The movie progresses at times in a predictable manner, and it seems as if director had focused too much on ‘HOW TO’ offer rather than focusing on ‘WHAT TO’ offer.

The storyline seemed to be skipping information and a little more depth and connection could have been built, so that the audience could have related to the movie characters better. There are many extra ordinary scenes in the movie, scattered through its whole length. Some of the best were the helicopter fight sequence and the camerawork that covered it. Shamoon Abbasi and Meesha Shafi danced while simultaneously an amazingly shot terrorist attack was taking place on the police academy. Lastly the shot taken whilst the first bomb explodes in the Truck as the actor recites the national anthem ‘Pak Sar Zameen’ is very moving.

WAAR is commendable and displays Pakistani talent at work. However critically analyzing the venture in comparison to cinematic productions of a similar kind from Hollywood, WAAR should have been in post-production a little bit longer and more focused on story and character building. Other than this, the movie stands tall and is still a must see.

If you want to watch the Pakistani Silver Screen rise, WAAR is a must-go – but if you are going to be critical, be assured that it has room for improvement. We know and it’s ok, it’s only the beginning.