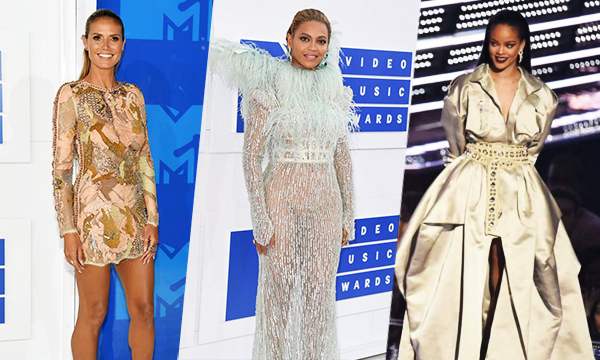 The Video Music Awards (VMAs 2016) took place on August 28th at Madison Square Garden, New York. A lot of the top grossing singers were nominated for their music videos, so the event was eagerly awaited. Unsurprisingly, Queen Bee, Beyonce led the score with 11 nominations followed by Adele who had 8.

The star-studded event saw some very glamorous performances as celebrities took the stage to strut their stuff. However, the question on everyone’s mind was who wore what, and did they pull off the look successfully. From what we saw the VMAs 2016 had some very whacky red carpet appearances. Even our favorite celebrities managed to let us down. While some just made us yell ‘what were they thinking?’

Take a look at some of the best, worst and most bizarre outfits sported by the celebrities.

It was clearly a night to remember for the singer who received the Michael Jackson Video Vanguard Award. The fact that she looked absolutely radiant in an Alexandre Vauthier couture gown was just a bonus.

Let’s be honest, Nikki Minaj has donned some pretty crazy outfits to the VMAs. This is definitely a step up.

Michael Phelps was all smiles at the VMAs 2016 with his better half.

Winnie Harlow killed it on the red carpet.

Possibly one of the best looks of the night were presented to us by Zara Larsson.

My first VMA!!!!!!!!!! I'm so grateful and thankful for being here. Thank you everyone who voted. You mean the world ❤️❤️❤️❤️

After dominating the Olympics, these lovely ladies rocked the red carpet at the VMAs 2016

What were they thinking

We love the Queen Bee, we just aren’t sure what she’s wearing.

It was nice to see Britney Spears perform after such a long hiatus. Her outfit was alright. Her arm candy on the other hand, needed to button up.

We know the teen likes to make headlines with his wackiness, but dressing like a hobo isn’t the best way to go about it.

Ariana Grande’s top was a bit too short, her bottom a bit too long. On in all, not her best look.

Rita Ora looked a little confused. Her outfit did the same to us.

Ansel Elgort channeled his inner biker in this outfit.

Naomi Campbell is elegance personified. This outfit however frightened us a little.

Not sure what Nick Cannon tried to do here.