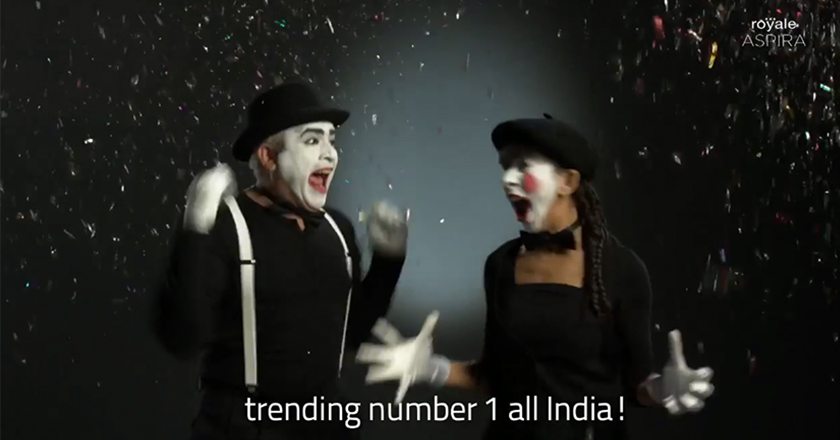 Asian Paints, one of the leading paint brands of India, is all set to leap into the social media landscape with a campaign that would definitely make you go speechless.

On a platform like twitter where words are the prime modes of expression, Asian Paints targeted the softer side of life, asking consumers to tweet about what made them go speechless.

The campaign was launched for two days using a mime video created by Contract advertising, which generated massive appeal immediately after its broadcast.

Users tweeted with the hashtag #Speechless on @asianpaints twitter page. As a response to the tweets, the agency formulated mime videos out of all the user tweets on real time basis and uploaded them on the brand’s YouTube page. As per records, 75 video stories were created, from close to 11,000 tweets the brand page received on Twitter.

“The idea was pretty simple – the campaign on television was a film about how Saif gets speechless with awe on mass media”, said Rayomand J Patell, VP and senior creative director, Contract India, while expressing the trail of inspiration behind the campaign

“We dwelled into a real time response campaign for that. The tweet would come in and we would work to figure what to do with it and have one or two rehearsals before we put it up“, he added.

The campaign’s success can be clearly realized from the fact that the #Speechless hashtag trended at No. 1 in India for two days in a row,  leaving behind trends like #MyManifesto (by Narendra Modi) and Philip Seymour Hoffman to attain the top slot for two consecutive days.

After observing the second hit of Asian Paints marketing campaign ( Saif Ali Khan and Soha Ali Khan ad made waves as well), we all await to see a hatrick of mesmerizing ads by this creative brand.