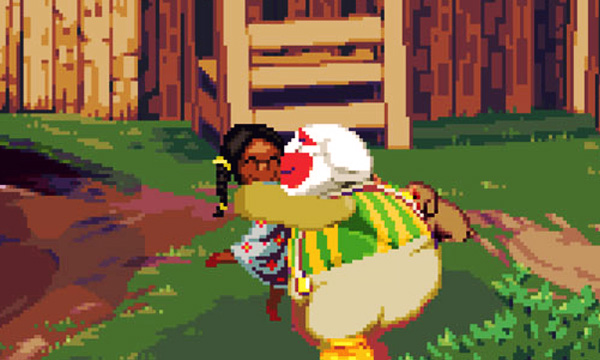 With well over a billion active Macs and Windows PCs in the world today, secrete yourself away with one of them (and maybe a friend) this Valentine’s Day to play some of the best relationship-themed video games from the past year: “Cibele,” “Emily is Away,” “Undertale,” “Fallout 4” and “Dropsy.”

See the details below:

The Free and Chatty Option: Emily is Away Take yourself back to the year 2002, complete with a retro-themed online chat client modeled after the now-iconic AOL Instant Messenger, ICQ, and Windows XP aesthetics as, over a five year period, your friend Emily navigates her relationships with you and the other people in her life.

Name your price via Itch.io, free on Steam Late-teen Nina plays online video game “Valtameri” where she meets Blake, the two pairing up for quests and, as time goes on, companionship. The game’s designer, Nina Freeman, has populated the semi-autobiographical “Cibele” with personal archive material from her own life. Why not give peace a chance, especially when a game explicitly rewards you for doing so? “Undertale” sends players on a very retro-style journey, but fighting is the worst way out. Far better to talk your way through confrontations so that everyone goes home happy, or at least not as hurt as they could be. BioWare, traditional custodians of the lavish action RPG laced with relationship mechanics, has been occupied with preparing “Mass Effect: Andromeda” for late 2016 at the earliest. So let’s turn to Bethesda’s “Fallout 4,” which has 13 travelling companions to encounter and, if desired, team up with, through the player’s exploration of a post-apocalyptic wasteland set in north-east USA.

For PlayStation 4, Xbox One, Windows PC

The Hug It Out Option: Dropsy Strange-looking circus clown Dropsy, an outcast after being blamed for a tragic big tent fire, still wants to make the world a better place — but there’s a bit more to it than just wrapping arms around the globe: some good ol’ puzzle-solving is required to best help people with their problems, whether big or small, emotional or physical.