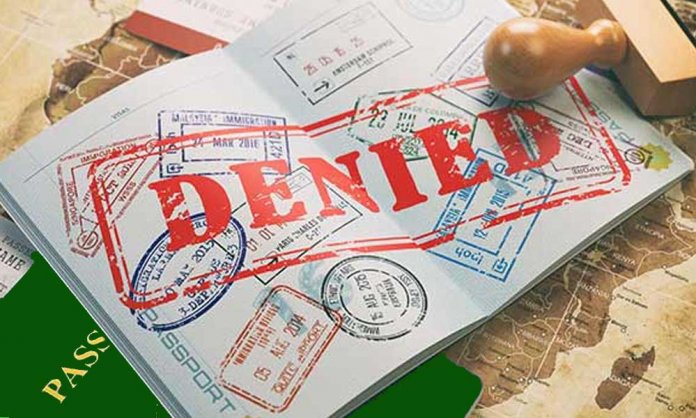 The United States of American has placed Pakistan in the list of countries facing sanctions within the framework of the law. This came after Islamabad refused to take-in the deported Pakistani citizens and visa over-stayers from America.

The State Department on Friday announced that the consular operations in Pakistan will remain unchanged as of now, however, it might become even more difficult for the citizens to attain a US visa, according to Khaleej Times.

Including Pakistan, there are a number of 10 countries on which the Trump administration has slapped the visa sanctions. Along with Pakistan, Ghana was also added to the list in 2019.

UAE Visa Requirements for Pakistan: Smart CNIC now a Must

Other countries with the sanction are:

Under section 243 (d) of the Immigration and Nationality Act, the Secretary of State is required to discontinue granting immigration or non-immigrant visas to a nation upon receiving notice from the Homeland Security Secretary that the country has denied or is unreasonably delaying accepting a citizen, subject, national or resident of that country.
The State Department tried to downplay the impact of the sanctions on Pakistan.

Former Pakistan’s Ambassador to the US, Hussain Haqqani, feels that this will make things difficult for Pakistani citizens.

This measure will create hardship for Pakistanis who want or need to travel to the US and could have been avoided if Pakistani authorities had not ignored American requests to respect their legal requirements for deportation -Haqqani told PTI, days after the federal register notification

He added that Pakistan’s refusal to accept it’s citizen deported from the US is not something new.

Pakistan’s refusal to accept every Pakistani citizen deported from the US is not new. It seems that the US is no longer willing to overlook a wide range of official Pakistani behavior. Bonhomie has been replaced by sanctions and restrictions based on Islamabad’s policy decisions -Haqqani said

Reportedly, since 1996, only 318 visa applicants have been affected by this law, according to the federal register notification. The notification also explains that during the same period, millions of applicants from the affected countries had received non-immigrant visas.

Furthermore, it adds that there is no ‘fixed’ formula and that the State Department has never issued a blanket refusal for visas from countries present on the visa sanction list.

Foreign Office Clarifies Reports about US Visa Sanction on Pakistan

On the other hand, the Foreign Office (FO) has termed the situation as misleading and has claimed that the media reports are also not true.

On Sunday, the FO claimed that there are ongoing issues between both the countries on consular matters including repatriation issues.

As of now, both the US and Pakistan are working bilaterally on resolving the issues consistently with their respected laws and have made considerable progress.