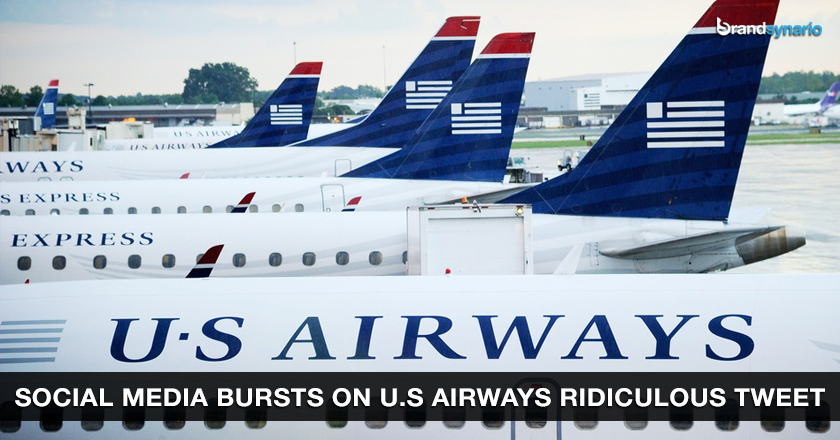 U.S Airways has made it to the top of the brand disasters’ list, with the most offensive tweet of all time.

US Airways, (accidently or not) tweeted an almost pornographic picture as a reply to one of its customers while asking for feedback.

The tweet became the laughing stock of the social media world within moments and also severely offended many customers who lashed out on the airline through their angry tweets.

The disastorous mishap was later removed from the brand’s official Twitter account and a formal apology was also posted by US Airways but unfortunately, the customers are still quite furious with the brand, as can be seen from their tweets stated below:

Sorry @USAirways I thought that was a DM #mybad

Meanwhile, Chipotle saying “Oh good, we’re finally no longer at the top of the list of social media screw-ups.”

Some people are saying @USAirways was hacked but it looks like an inside job.

I’ve always said US Airways had the most leg room.

I’ve always said US Airways had the most leg room.

Right now CNN is on the phone with @USAirways. “I heard you found a plane?”

Kickstarter to give a Pulitzer to the best @USAirways reply

Wow @USAirways. I’ve heard of getting screwed by an airline but this is ridiculous.

Dear @USAirways, just blame it on Heartbleed. Everyone will believe you.

Just imagine if you viewed that @USAirways tweet via Google Glass…

Just be thankful it wasn’t a model of the 787 Dreamliner.

we’re sorry to hear that you did not have a good trip, Mr. Armstrong pic.twitter.com/Njhd8QG0C1

.@USAirways, we take these tweets very seriously. Your IP address and details will be forwarded to security and the FBI.

Big thanks to @USAirways for finally giving us a satisfying ending to LOST.

Figures that Snowden is staying silent on the vagina plane. What is he hiding. What does he know

BY THE WAY, HAS ANYONE SEEN MY LITTLE HANDHELD PLANE?

A US Airways Plane Went Down. Where It Landed Will Restore Your Faith In Humanity

And the plane, hopefully. RT @USAirways: We apologize for an inappropriate image shared in one of our responses. We’ve removed the tweet.

Cockpit. That is all. @USAirways

“The hell with you, Pulitzer Prize committee”, the @USAirways social media intern yelled, “I’ll show YOU how to dominate the news cycle.”

Surprised the offending @USAirways tweet was up for so long. Even their reaction time gets delayed.

Working on a pretty good “I always get stuck sitting near a crying baby” joke. @USAirways #VagPlane

“US Airways,” Don Draper begins. “To boldly go where man has gone before.”

I am actually aboard the US Airways plane. Wifi is still working and everyone is pretty chill. pic.twitter.com/ym7kgYYWjX

Turns out US Airways has way more destinations than we ever imagined.

Personally, I’m glad US Airways parked at Gate 1 instead of Gate 2.

Personally, I’m glad US Airways parked at Gate 1 instead of Gate 2.

Either someone at US Airways is terrible at doing their job or incredible at quitting their job.

Congrats, @USAirways! You are the number one trending topic on Twitter in the US.

We apologize for an inappropriate image recently shared as a link in one of our responses. We’ve removed the tweet and are investigating.