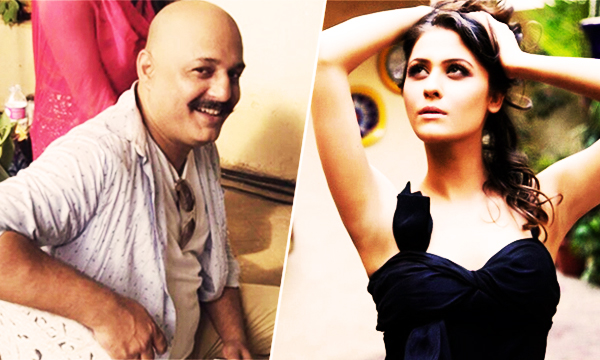 Another entertainment treat to hit the country’s cinemas is the upcoming movie “Two+Two” now renamed as “Jhol”. Pakistani TV actress Nausheen Shah is all set to make her movie debut alongside Ali Azmat in this movie. The movie will sure be a funny entertainment flick.

“The film has now been renamed Jhol,” she added. The producer revealed that Jhol was the first title preference for the movie.

“My character Chandni is a very naughty, bold, witty woman who falls in love with Ali Azmat’s character, Rafique,” Nausheen stated. She will also be performing a dance number in the movie.

Ali Azmat is playing the role of a middle-aged policeman who is funny, flirtatious and totally fun loving.

“He’s a middle-aged police wala, who is totally ayaash,” stated producer Hamza Ansari. “He’ll often be seen on his bike.” Jhol movie will also be starring Urwa Hocane as a businesswoman and Bilal Ashraf will be playing a doctor.

“Working with the director and producer has been an awesome experience and people will love my character,” said Nausheen.

Initially titled as Jhol, the starlet Urwa Hocane and Bilal Ashraf have released an interesting BTS shot of the movie. Ayesha Omar, who sizzled in an item number has also released some fun-filled BTS shots of the making.

Let’s have a look at the BTS shot below posted by both Urwa and Bilal.

You know whats rare to find, a gem of a co actor like this one ! @ashrafbilal 💎✨😌 #onset #two+two #comingsoon #pakistanicinema 🎬 #goodvibes 👼

Urwa addresses Bilal Ashraf as a gem of a co-actor while Bilal Ashraf has posted the same shot with the following comment:

Both can be seen making funny faces in the picture and seem to be really happy and excited during the filming. The movie is promised to be an interesting blend of comedy and action.

Some other exciting BTS shots of Ayesha Omar have also surfaced on social media recently; let’s have a look! The styling for the movie has been done by Nomi Ansari; he can be seen on the sets with the fashionista, Urwa Hocane and the style diva, Ayesha Omar in a BTS shot below; Ashraf will be playing the role of a doctor, Azmat is anticipated to be seen as an avatar of a middle-aged cop while the stunning starlet Urwa is playing the part of a high-profile businesswoman.

The movie is shot in areas like Ranchore Lines in Karachi and even parts of Hyderabad. Let’s hope the movie is just as fun to watch as the shots seem to be.

The much-awaited extravaganza is a mighty infusion of comedy and action; being the directorial endeavor of  Shahid Shafaat while being produced by Hamza Ansari and Hassaan Azhar of  Epiction Films, the movie has stirred immense excitement amongst the audiences.

Stay tuned to Brandsynario for more updates on this movie!