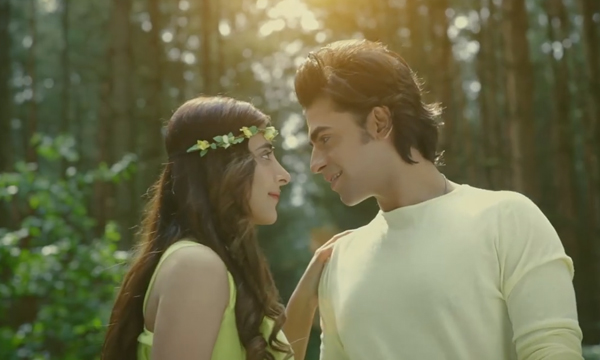 Last month, our Instagram feed was flooded with pictures of Urwa Hocane and Farhan Saeed having the time of their lives while holidaying in Europe! But while their vacation pictures gave some serious travel goals to everyone, their latest song “Saathiya” shot during their trip to Berlin is bound to give their fans major relationship goals!

The tune has been shot for Lays “#passAsmile” campaign. While Farhan has devoted his voice for the track, he is also starring in the video and is seen romancing Urwa.

Check out the video below, featuring Urwa Hocane & Farhan Saeed.

While Hocane flaunts her girl-next-door look in the track, Saeed kills it with his cute, laid-back style.

"SAATHIYA" releasing tonight on the #layspakistan facebook page!💥 Dont forget to check it out! 📢 We also have fun goodies for the winner fans! Lets see who wins! 🎁🎉 #passasmile @layspakistan

However, this is not the first time the celebrity partners have starred in a song together. Previously, we saw them in Farhan Saeed’s music video “Tu Dhori Dair”, where the ex- Jal singer plays the role of a newly-wed soldier who is compelled to abandon her bride, played by Urwa Hocane, for a call to duty.

We really can’t get enough of the chemistry between the good-looking pair. Both off-screen and on-screen, the lovebirds keep the charm alive and rock at whatever they do!

Currently, the duo is working their magic together in Hum TV’s Udaari and have become the favorite star couple of Pakistani fans.

Love Urwa & Farhan’s tune “Saathiya”? Share with us in the comments below.