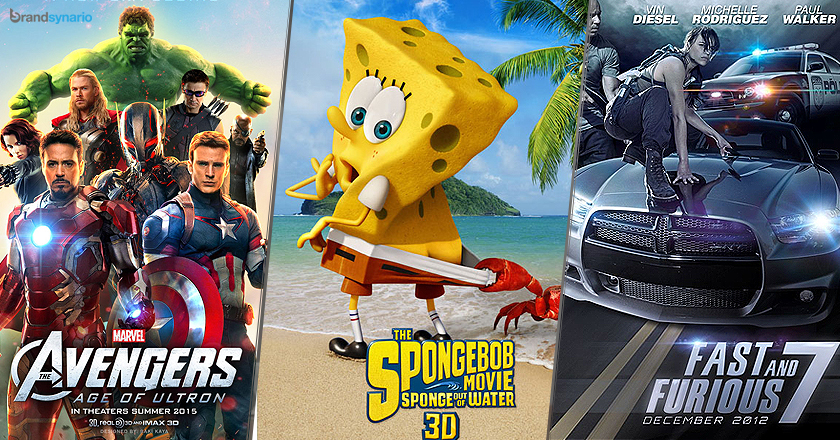 Save the dates as we bring to you the list of most anticipated Hollywood movies for the year 2015!

THE AVENGERS: AGE OF ULTRON

Marvel Studios production and the sequel to 2012’s superhero movie Marvel’s The Avengers, The Avengers: Age of Ultron revolves around the failed attempt by Tony Stark to start a peacekeeping program with Ultron, a self-teaching artificial intelligence, following the abolition of S.H.I.E.L.D. The plan quickly backfires as Ultron sets his sights on destroying the main enemy, humans, from the face of the Earth. It is up to the the Avengers now to stop Ultron from achieving its motives.

The movie starring Robert Downey, Jr., Chris Hemsworth, Chris Evans, Scarlett Johansson, and Samuel L. Jackson amongst others, is set to hit the cinemas on May 1st, 2015.

Carrying on Hollywood’s increasingly massive “Fast & the Furious” franchise, Furious 7, delayed for a year and sadly tainted by the death of star Paul Walker. The movie takes place after the event of the crew’s triumph over Owen Shaw, where the crew, including Dominic Toretto and Brian O’Conner return to the US to live a normal life. However Owen’s brother, Ian Shaw, is after Dominic to avenge the blood of his brother, putting the life of all the crew members in danger.

The film is set almost thirty years after the events of Return of the Jedi, and stars three new faces along with returning actors from the previous chapters. The film’s cast includes Harrison Ford as Han Solo, Carrie Fisher as Leia Organa, Mark Hamill as Luke Skywalker, Anthony Daniels as C-3PO, Peter Mayhew as Chewbacca, and Kenny Baker as R2-D2

THE SPONGEBOB MOVIE: SPONGE OUT OF WATER

Burger-Beard, an evil pirate is in search of the final page of a magical book that makes any evil plan he writes in it come true. The final page just happens to be the Krabby Patty secret formula. When his search is completed and the formula goes missing, Bikini Bottom becomes embroiled in danger. SpongeBob SquarePants, Patrick Star, along with Mr. Krabs, Sandy, Squidward, and Plankton go on a quest on the dry surface to get the recipe back and subsequently save Bikini Bottom, whilst transforming themselves into superheroes to fight Burger-Beard and his super villain pirate crew!

A young orphan from London, named Peter Pan, living in the World War II era, is spirited away to the magical Neverland by pirates of the villainous Blackbeard, where great adventures await him. He leads a rebellion against the tyrannical rule of Blackbeard to save the land and forever be known as Peter Pan, the boy who never grew old.

The movie is based in the year 2029 when the violent Future War is raging in full force and a group of human rebels has the evil artificial-intelligence system Skynet on the ropes. The cast includes Arnold Schwarzenegger as The Terminator, Jason Clarke as John Connor, Emilia Clarke as Sarah Connor, and Jai Courtney as Kyle Reese.

After being symbolized as the ‘Mockingjay’, Katniss Everdeen and District 13 engage in an extreme revolution against the tyrannical Capitol. The cast includes Jennifer Lawrence, Josh Hutcherson, Liam Hemsworth, and Woody Harrelson amongst others.

Twenty-two years after the events of Jurassic Park, Isla Nublar, now features a fully functioning dinosaur theme park, Jurassic World, as originally envisaged by John Hammond. A member of the park’s on-site staff conducts behavioral research on the Velociraptors and at the corporation’s request, a genetically modified hybrid dinosaur to increase visitor attendance is created by the park’s geneticists. But, as they were going to find out soon, it soon starts running wild on the island! The cast of Jurassic World includes Chris Pratt, Bryce Dallas Howard, Vincent D’Onofrio, Jake Johnson, and Irrfan Khan.

Which movie are you most looking forward to in 2015? Tell us about it in the comments below!