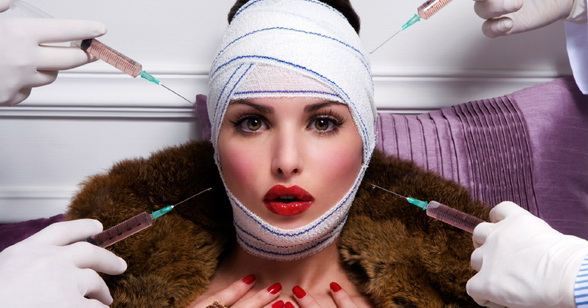 Plastic surgery dates back as early at 500 BC. In the 16th century, Gaspare Tagliacozzi, renowned as the father of plastic surgery reconstructed noses brutally cut off in battles, later in 1798, the actual term, ‘plastic surgery’ derived from a Greek word, ‘plastikos’ was coined by Pierre Desault.

Over the years it has been used to treat deformities, however, the obsession among celebrities to meet their own benchmark of beauty is quite alarming. One should be a self-critic but not to an extent to question nature about their own looks which at times leads to recreating themselves in a horrendous way.

Below are some examples of celebrity faces that were once beautiful  for as long as they were allowed to say natural … then unnecessary plastic surgery happened:

1. Actor Mickey Rourke is one of the few actors who admits to getting plastic surgery done, according to him he went to the wrong guys to get his boxing injuries fixed in the 90’s. 2. Shauna Sand’s lip injections have completely changed the way she looks. Some things are self-inflicted. 3. Be scared! Be very scared! For this is what humans are capable of doing to their once beautiful face. Meet television actress Nikki Cox, who got cheek and lip implants when she was just 34 years old. 4. Amongst the list of several plastic surgery failures, Daryl Hannah could easily be included as someone who now regrets this change. Sometimes it’s just good to age gracefully rather than regretfully. 5. Behold! This isn’t the Ghost of Christmas Future; this is infact 66 year old American actress and singer, Cher who underwent plastic surgery to enhance her looks. Like other celebrities succumbing to social pressure to continue enjoying stardom, she jumped on to the same bandwagon to remain attractive and relevant though at the cost of some artificial looks.

6. Oops! ‘I live for plastic surgery,’ admits Janice Dickinson a supermodel. Someone should rather be dead than living for something that ruins natural beauty. 7. Melanie Griffith too has changed her looks with a series of cosmetics surgeries. 8. The Queen of Pop, Madonna is not left behind when it comes to experimenting with the face. 9. The 53 year old Actress, Meg Ryan has occasionally destructed her face as a result of lip injections, cheek implants, brow lift, neck lift and what not. She is not in her original state anymore, rumor has it that the angels too have difficulty recognizing her now!