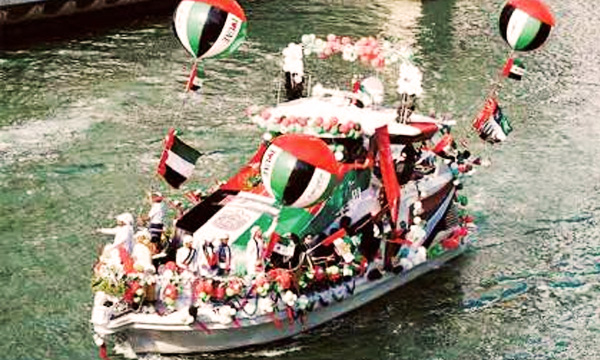 Let’s have a look at some snaps for the celebration of the 44th National Day of UAE.

Representing Different Nationalities in the Parade

Within days #UAE celebrating the 44th National Day ♥ The 2nd of Dec Welcome to the country of peace & innovation pic.twitter.com/z8RLxXolxN — universe (@into_space_) November 28, 2015

UAE lightened up with the colour of the flag

Sports Cars and Bikes on the streets of Downtown Dubai

The 44th UAE National Day is not only a day for the citizens of the country, but it’s a thing of pride for people living in a multi-cultural state.

A group of rare sea turtles rescued from the Gulf coastline were released to mark the 44th National Day. It was part of a conservation programme by the Dubai Turtle Rehabilitation Project (DTRP) in partnership with Dubai’s Wildlife Protection Office. Organised by the Watani Al Emarat Foundation, the exhibition follows the story of Salem Suhail Khamis, who is considered the first martyr of the UAE killed in defence of his homeland. Dubai Police holds many activities around the city, including an open sports day, carnival and military parade featuring the mounted police and band and of course, a parade of their famous supercar fleet and bikes. Stay tuned to Brandsynario to get more updates!