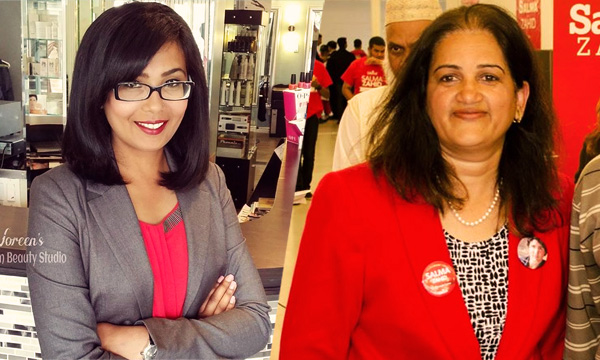 Salma Zahid and Iqra Khalid, two Pakistani women of Canada’s Liberal Party ousted their opponents in the 2015 Canadian federal election held on Monday. The Liberal Party has reclaimed its 20-year-old grip on Scarborough Centre which was lost in the last election. With 50.5 percent votes, Zahid unseated Roxanne James, a Conservative candidate who won in 2011.

According to a report, Salma Zahid received 13,376 votes, James gathered 8,080, Alex Wilson of the NDP had 3,096 votes, Libertarian Katerina Anroutsous garnered 986, and Lindsay Thompson of the Green party had 638 votes. “Scarborough families tonight voted for real change,” the MP said during a gathering arranged to celebrate her victory. She is determined to work hard for her people. “I will work hard to deliver the results they deserve,” she added.

As an agent of real change, Zahid’s is eager to meet the challenges through transit infrastructure, youth employment and moving to repeal the Conservatives’ Bill C-24. She stated:

“The Liberal Party has a plan to meet these challenges. We will:

Another Pakistani-born Liberal candidate who shone in the Canadian national election is Iqra Khalid. She defeated Conservative incumbent Bob Dechert in Mississauga–Erin Mills riding. The first-time candidate swept to victory in a hard-fought scuffle because of the anti-Muslim agenda of the Conservative Party. Mississauga–Erin Mills is a Muslim majority electoral district and more than 16 percent of the riding’s population identified themselves as Muslims in the 2011 National Household Survey.

The young Pakistani is keen to strengthen ties among citizens and take the nation to greater heights. She immigrated to Canada in the late 1990’s from England, where she began her formal schooling. She graduated from York University in 2007 and later obtained her Juris Doctor. She is now working as a legal professional with the City of Mississauga.