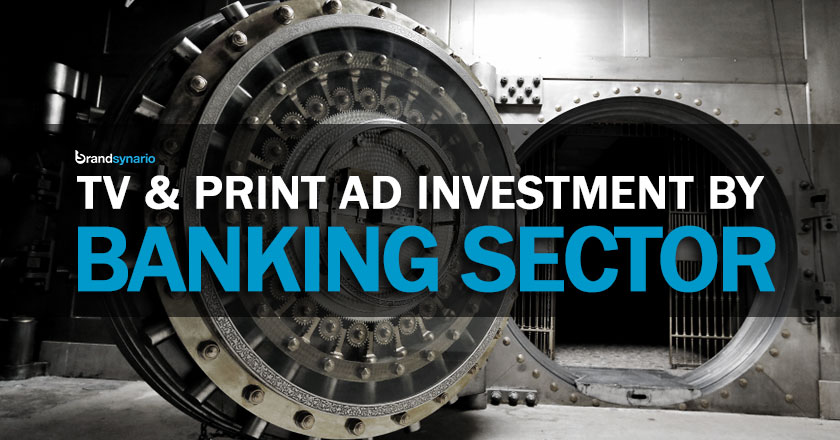 The emotional connection built through advertising is long known and has become an accepted norm now. The financial industry might be viewed as highly corporate, but in actuality it’s consumers seek a trusted partner and a venue to build a long term relationship. On the hand, since this sector is becoming highly competitive, financial institutions are expanding their horizons to maintain necessary customer satisfaction levels, which is often achieved through advertising.

A recent research conducted by Media Track Pakistan demonstrated the extent to which TV and print media is utilized by the banking and financial institutions of Pakistan, to advertise their products. This year the banking sector has spent roughly 531 million on TV advertising, which accounts for 61% of the total media spend. Bank AL Habib emerged as the top advertiser, spending hefty sums in June and July to promote its campaigns named HBL Express Account (50.6 million) and HBL Freedom Account (54.6 million). However, the Mr Bean series campaign was highly promoted by Bank Al-Habib in December 2013.

In terms of attracting the viewers, various campaigns by different banks dominated the advertising scenario on TV. In Q1 of the year 2013, the most noticeable campaign on TV was UBL Omni, with a budget of 32 million. Q2 was highly subjugated by HBL, while in Q3 Alfalah’s Kamyab Karobaar enjoyed the limelight. In Q4, Bank Al Habib’s campaign on Individual current account surfaced as the campaign with the highest spends.

BRANDS IN THE BANKING SECTOR AND RELATED SPEND ON TV

HBL leads  in terms of spending on TV advertising. In 2013, HBL spent around 166 million on TV advertising, and constitutes about 31% of the total spend on TV advertising. This huge spend justifies the research result which yields that out of the total 40,000 minutes of advertising, which were aired for this particular category, 11000 minutes displayed various HBL campaigns. This further verifies another major finding of this research which states HBL Express and HBL Freedom Account as Top brands, both of which constitute around 10% of the of the spend and as mentioned earlier, since hefty amounts of money was spent on these two particular campaigns, the impact of TV advertising can be substantiated through the increased recognition of the brands, which would ultimately contribute towards brand image building and brand equity. HBL is followed by Al Habib and UBL, both of which contribute around 11 % of the total TV advertising spend and get around 2000 minutes of the air time. Their products named Bank Al Habib Apna Individual Current Account and UBL Omni are ranked as third and fourth in the Top Brand listing, having a spend of 37 million and 31 million respectively.

BEST TIME TO ADVERTISE ON TV

The air time for banking and finance sector starts primarily from pre-prime time, with 15-20% share, reaches its pinnacle at prime time with 20-25% share and ends in post-prime time. Bank Al Habib capitalizes prime time the most, by allocating 66% of its TV advertising in this day part split. UBL and ABL follow, each having 47% of their TV advertisements aired in prime time. Certain other banks follow a contradictory approach, like MCB which relies on Matinee (36%) and Morning (27%) day part splits to air its advertisements.

Since this sector is highly corporate, it spends more than 50% of its airtime on news channels, and also entertainment channels are exploited as major platforms, because of their augmented viewership. GEO News and Hum TV emerge as the most preferred channels by the financial sector, because of the amplified and loyal viewership. Although, Geo News holds 23% of the market share of the news channels, still its preference for corporate advertising is noteworthy. Positioning of an ad contributes significantly, particularly in terms of its viewership. Soneri bank spots achieved highest premium positions (75%), followed by HBL and Summit bank with 64% premium spots each. Other than pure commercial airtime, the spots were mainly aired in promo and bumper form which render the benefit of enhanced viewership at low cost.

Another significant medium of advertising is Print media, which is also highly exploited by certain banks and financial institutions. Its constitutes 39% of the total advertising spend by the financial sector of Pakistan (342 million). The research results yield that the top 10 advertisers in the TV category are not the leading advertisers in print media, rather contribution from other banks composes 42% of the print spend (144 million). HBL and Soneri dominate the rest by spending 26 million and 21 million respectively on newspaper advertising. The results reveal that although newspaper is a highly preferred medium by all banks but Bank Islami stands out by advertising 67% of their budgets for print ads in magazines.

Furthermore, the results also demonstrate the popularity of Dawn and Jang Group, as they carry maximum number of ads from this category, which can be translated into the high preferences associated to them.

The research reveals the significance of advertising in establishing customer relationship and its contribution towards brand building. It also reveals how banking industry capitalizes on traditional mediums to increase their brand presence and awareness.