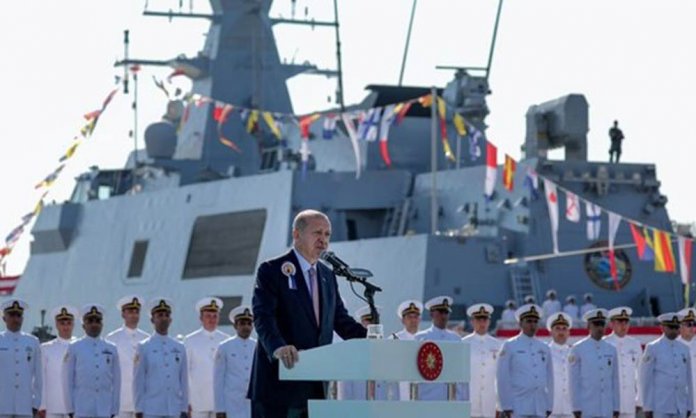 Over the weekend, a dual ceremony was held to commission a new Turkish naval ship while commencing construction of a ship set to be sold to Pakistan’s navy.

Turkey has always played the role of a friendly sister to Pakistan, and the aim of constructing this warship is to benefit the Turkish nation and Pakistan.

Pakistan’s navy signed a contract for the acquisition of four MILGEM-class ships from Turkey in July last year.

Here is what Erdogan said in the ceremony:

“Our navy, rich with glorious victories, is carrying this legacy into the future by further strengthening it,”

Its top-class “equipment, discipline, qualified personnel and all the accomplishments it undertakes” make Turkey proud.

Turkey is moving forward with the resolution to succeed in the domains of shipbuilding, artillery, missiles, torpedoes, and electronic systems.

Erdogan also spoke about and emphasized on the situation of occupied Kashmir, comparing it with that of Palestine, adding that more than 8 million Kashmiris are braving Indian atrocities in an open-air prison on their territory.