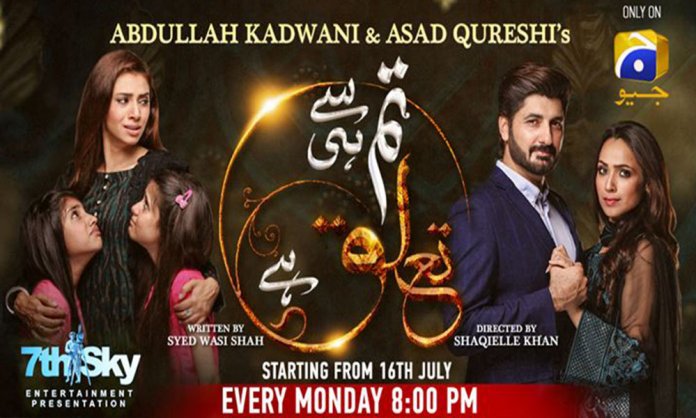 Get ready viewers, as the latest drama by 7th Sky Entertainment, titled ‘Tum Se He Taluq Hai’, is all set to hit your TV screens from today, Monday 16th July!

Produced by the super hit drama ‘Khaani’ duo, Abdullah Kadwani  and Asad Qureshi, the drama is directed by Shaqielle Khan and is penned down by Syed Wasi Shah.

Faryal Makhdoom Gets Real About Her Plastic Surgeries!

Sadan and Alina (played by Jibran and Tooba) are a married coupled with daughters. While Alina had envisioned their lives to be perfect, her world comes shattering down when she comes to know that her husband is attracted to a colleague from his office, Rama.

Enter Rama, a woman with ulterior motives and after Sadan for his money. However, unaware of that fact, Sadan finds himself drawn towards her and ultimately ends up marrying her and throws Alina out of the house. From there, he begins a new life with Rama and his daughters.

Will Sadan ever find out the true face of Rama? Will Alina ever forgive him? What will be the fate of these characters? You will find out tonight as the drama goes on air on Geo Entertainment!

Are you excited for this show? Tell us in the comments.

Zaid Ali Gets Slammed for Marrying an Elder Woman