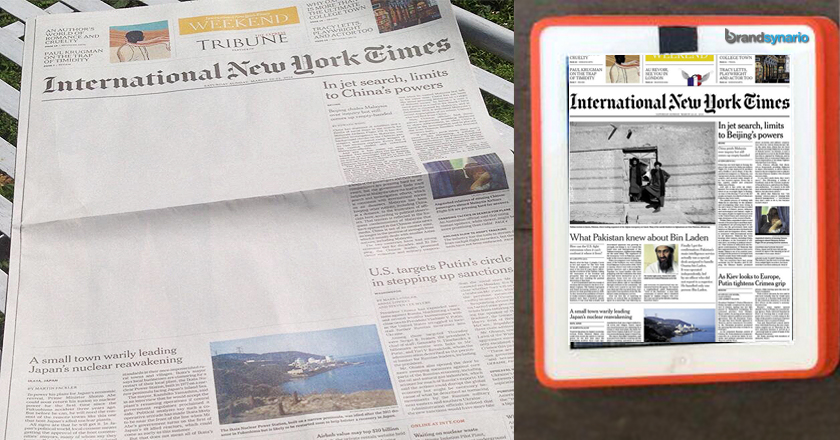 Thus, this is how New York Times cover page ended up looking like in Pakistan this Saturday March 22nd. When some thought it was a misprint, Carlotta Gall – The story’s writer tweeted this from her official account.

What is even more embarrassing is that the official spokesperson for New York Times – Eileen Murphy states that this ‘inexplicable censorship’ was carried out by Tribune without the consent of The Times.

Even Mashable reports about this absurdity ad so does most of the influential Pakistanis from their social media profiles.

Pakistani readers were not able to see the International New York Times’ front-page story, as it was censored by the newspaper’s local printing partner.

Entitled “What Pakistan Knew About Bin Laden,” the Saturday cover story by Carlotta Gall was completely blanked out in a conspicuous censorship effort.

The writer tweeted out a photo of the International New York Times edition in Pakistan, showing the huge white space where her story was supposed to be.

International spokesperson for The New York Times’ states to Bloomberg, that The Times’ would never censor its own content ergo this decision was made without the Newspaper’s knowledge or agreement. She adds further, ‘While we understand that our publishing partners are sometimes faced with local pressures, we regret any censorship of our journalism.’

The controversial coverstory is in reality an excerpt from Gall’s book that is yet to surface. Both the book and its excerpt deals with the conspiracy theory that Pakistan’s intelligence service ISI (Inter-Services Intelligence), knew Osama Bin Laden was in Pakistan, and might have provided him with shelter.

These speculations are all a mere allegations, however by censoring speculations so blatantly will only raise suspicion and strengthen these accusations.