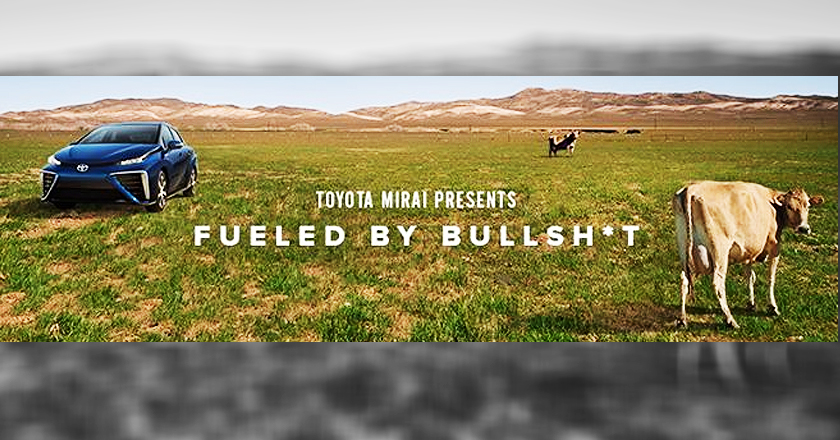 Toyota has started a brilliant new campaign to market and promote its hydrogen fuel cell based car, the Toyota Mirai.

Appropriately named “Powered by Everything”, it’s a series of episodes to prove that the Toyota Mirai and all hydrogen vehicles, in general, can be powered by everything around us.

Since hydrogen is found in abundance on our planet, the hydrogen can be extracted from the sources deemed suitable and then used to power up the vehicles.

Toyota pulled the most ironic and clever campaign to boot critics who called it ‘inefficient’, ‘dead on arrival’ technology, a ‘pipe dream’ and even went as far as to call it ‘bullshit’.

Powered by Everything – Episode 1: Fueled by Bullshit stars Scott Blanchet, an engineer who explains and performs the transformation of bullshit into usable hydrogen fuel. Scott borrowed some manure from a farm operated by Ron, the farmer. He then proceeds to explain the steps taken to convert it into hydrogen fuel.

The car is filled with the hydrogen cell extracted from manure and put to the test whether it will run or not. And it does.

Toyota Mirai has no traditional combustion engine; instead it uses an electric engine to run. The hydrogen combines with the oxygen to power up the fuel cells and provides DC (Direct Current) electricity for the engine. The car emits no smoke, air pollutants or gases, just drops of water from the exhaust.

We sure hope this technology comes to Pakistan soon, because there is a LOT of bullshit here.