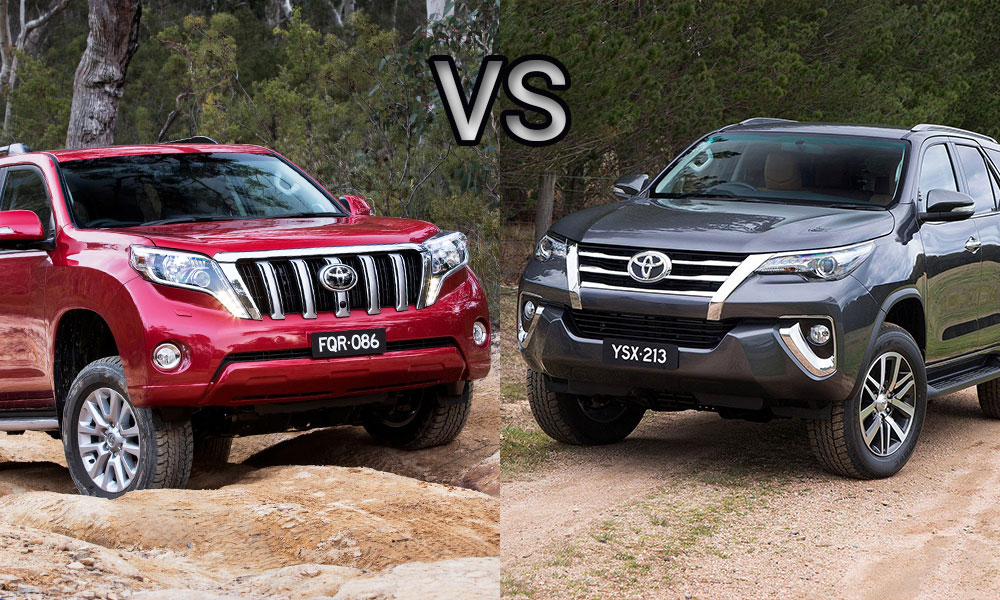 The New Fortuner’s design is based on the “Keen look” design language which is being used by Toyota Corolla and the new Toyota Hilux Revo. The car comes with slim projector headlights and daytime running LEDs. The new 4th generation Prado was released in 2009 and it has seen recent improvements. The 2016 Prado has a facelift and more features like LED headlights, new front panels, and suspension improvements.

The exterior of both cars looks impressive. The Prado though looks more muscular and tough compared to the Fortuner. The Fortuner comes with a modern design with side steps, roof rails, rear spoiler and stylish 18 inches allow rims. The new Toyota Fortuner is a bit smaller in length and width when compared to the Prado. The Prado hasn’t gone through major changes from its predecessor. The New Fortuner and the New Toyota Prado have a completely new interior. Toyota Fortuner’s interior is much improved even though it is based on the Hilux platform. The interior and features in it depend entirely on the variant you select. The Prado has interior is more spacious and comfortable. Some of the features in the high-end model of the new Toyota Prado are; heated seat, 7-inch touchscreen LCD, reverse camera and 17 speakers audio system, multi-information display dashboard, climate control and a multi-functional steering wheel.

The High-end model of the New Fortuner comes with features like; leather seats, power seats, 7-inch touch screen LCD display, multi-functional steering and more. The boot space of the Prado is 742 L while that of the Fortuner is 716 L.

The New Fortuner comes with 5 engine variants. The new 2.4 2GD engine generates about 111 kW (149 hp) at 3400 rpm of power. Though the variant that comes in Pakistan will most likely be a 3.0L 1 KD series engine. The Prado on the other hand also comes with 5 engine variants. According to Pakwheels.com Listings, the Prado is available in the 4.0 L 1GR-FE V6 Dual VVT-I (petrol) and 3.0 L 1KD-FTV VNT I4 Common Rail D-4D (Diesel) engines. Both cars are great in looks. Though the Prado is bigger than the Fortuner. The price of the New Fortuner is expected to be between PKR 4.0 million and PKR 5.0 million while the Prado costs about PKR 20 million.