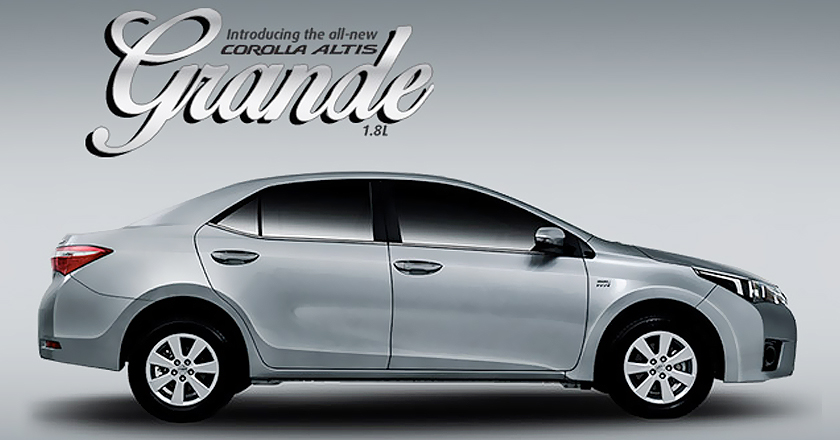 Thoroughly competent and utterly delightful, with a glinting exterior and iconic interior – the 2015 Toyota Corolla Grande keeps with its predecessors’ reputation of simple, yet luxurious transportation on all kinds of terrain.

With a revamped and redesigned model last year, Toyota effectively showed that the Corolla can be classified as something more than an avaricious, economic, and trouble-free family car.

In addition to the new sharp, sporty look, the 2015 Corolla Grande boasts a quieter cabin and increased fuel-efficiency, coupled with all the latest in-car technology that the users expect from their vehicle. With such increased levels of comfort and performance, this car when compared to its main global competitors Honda and Suzuki, gives a higher value for money at a considerably lower cost.

The designers at Toyota have successfully managed to retain the essence of the Corolla, while also remodeling the appearance of the 2015 model, giving it an edgy and aesthetically appealing, sporty look. The 2015 Corolla Grande is three inches longer than the pre-2014 model, with a longer wheelbase – the wheels are stretched out further into the corners of the car. This gives the car increased stability and increased interior space. The headlamps have built-in LED lights and while additional running lamps complete the sporty look. The front-end appearance has also been modified, with dark gray Argent painted surrounding the front grille and fog lamps.

The interior has been brilliantly altered with improved materials pushing corners of the cabin outwards to give a more spacious look. The dashboard has also been changed to be made of soft-touch material. The seats are made of a steel gray fabric, while the ‘S’ model has seats that are made from leather-like Softex bolsters combined with color-toned fabrics.

For a mid-sized sedan, the 2015 Corolla Grande provides increased leg room in the back seats. With the 4-inch increase in the wheelbase, the car can easily allow tall people to ride in the back with other six-footers. The car also houses longer cushions and increased back support for the front passengers, while the steering wheel has been readjusted by about two degrees to give the driver a relaxed, ‘big-car’ feel.

The trunk space is low, flat, and has a wide opening, and measures about 13 cubic feet in total, which allows for more space to accommodate baggage.

With increased leg-space and trunk storage, the car also moves with very little buzz and vibration, while the engine sound has been tuned to a minimum.

The 2015 Corolla comes in both manual and automatic transmissions, with the S-model coming in a 6-speed manual control, with a 55 liter fuel tank.

The entertainment system in the new Corolla model is not only brilliant, but is one of the best infotainment systems available in the affordable cars category. The base model features:

– An auxiliary audio jack, and USB/iPod connectivity (with charging and full USB 2.0 compatibility)

The 2015 Toyota Corolla Grande has the following features: