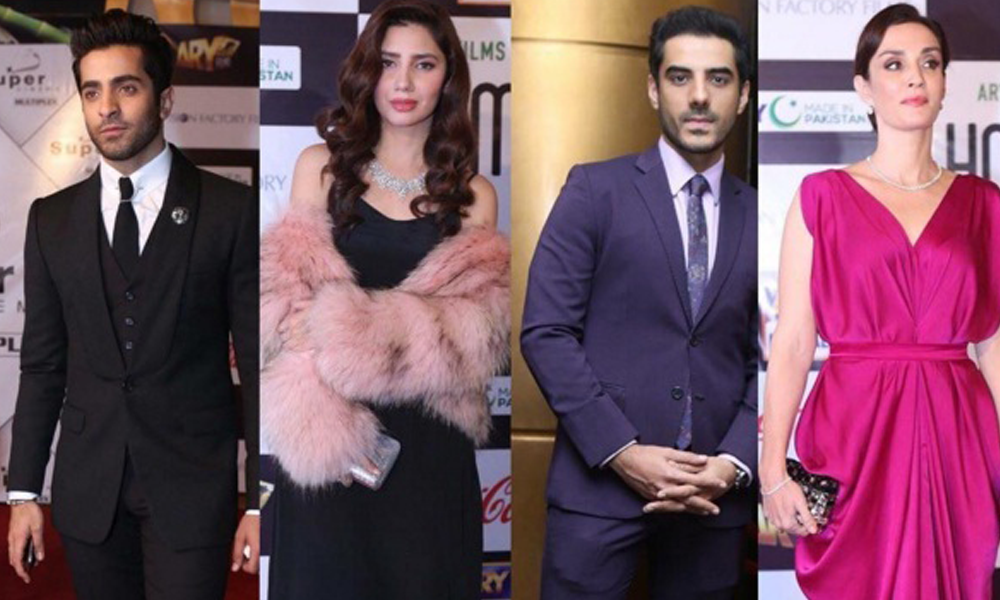 The much hyped Pakistani movie Ho Mann Jahaan had its grand premiere in Lahore yesterday and attendees praised the work of all the stars. The movie will hit theaters on 1st January 2016 for public viewings.

From bloggers to sportsmen and to film stars to musicians, celebrities came out to attend the premiere of this flick and to render their support to Pakistani cinema. Hamza Ali Abbasi, Fawad Khan with wife Sadaf, Zhalay Sarhadi, Nadia Hussain, Shoaib Malik, Ali Zafar, Ahmed Ali Butt, Meera and many others were in the attendance.

Former President Musharraf was also present at the Karachi premiere:

The entire cast of the movie flew to Lahore to attend the premier. Legendary actress Bushra Ansari, who has been missing from all the promotional events was also seen on the red carpet of the premier.

Cricketer Shoaib Malik updated a picture of him with the cast of Ho Mann Jahaan at the premier and captioned his picture as:

“I love movies and made in Pakistan stuff and #HoMannJahaan does it beautifully. Good movie. Congrats to the team.”

I love movies and made in Pakistan stuff and #HoMannJahaan does it beautifully. Good movie. Congrats to the team 🇵🇰 pic.twitter.com/2m7svVcV71

Designer Mina Hassan who dressed Sonya Jehan for the premiere also wrote about the movie that:

“Fantastic movie and a fantastic performance by our favorite actress – it’s a must watch for everyone!”

It surely seems to be an amazing event and the rave reviews the movie got increased our excitement a little bit more.

Tell us what your expectations from the movie are by commenting below.