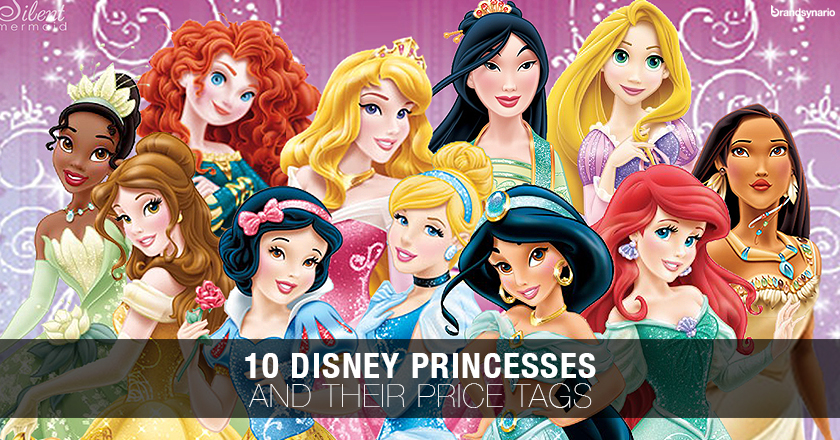 Over the years, Disney Princesses have ruled the hearts of Disney fans everywhere. Their popularity speaks volume of their greatness that even led to the formation of their own incredibly famous media franchise.

Comprised of eleven lovable branded beauties, the franchise that originated in the 1990s is now Disney’s leading marketing juggernaut.

But the question remains: Who is the richest of them all?

We peeped into the gross lifetime income of the princesses in every Disney movie.

From least to most rich, here are the top ten wealthy Disney Princesses of all times.

10. Rapunzel: Locked in a tower for ages, the cute and courageous golden-haired Rapunzel of Disney’s “Tangled” has earned $202 million to her name

9. Mulan: With a total worth of $207 million, the fierce warrior of a princess becomes the only Disney heroine that dared to challenge the gender roles of her society and rescued an entire nation on her own.

8. Ariel: The fourth Disney royalty in line and the iconic red head, princess of the sea “Ariel” is worth a whopping $213.2 million.

7. Merida: The fairy-tale feminist “Merida” is the only Disney’s computer-animated princesses that had no love interest. The fiery red haired character from the Academy Award winner movie “Brave” has reaped $241 million.

6. Pocahontas: Also existing in real life, Pocahontas is the single Disney princess that does not end up with the man she loves. Termed as the sexiest Disney heroine till date, she is worth $262 million today.

5. Belle: The book loving and the selfless “Belle” is the fifth official Disney princess from the movie “Beauty and the Beast”. Halfway down the list of the richest Disney Princesses, Belle has a total value of $365 milion.

4. Jasmine: Disney even has an Arabian princess-a Sultana “Jasmine” in the family from the legendary box office hit movie “Aladdin”. A popular figure in the Disney princess market, the beautiful Jasmine has earned a net income of $422 mllion.

3. Aurora: Saved by a kiss of true love, the pretty in pink princess “Aurora” occupies the third spot in the tradition of Disney Princess. The doll faced Disney royalty of “Sleeping Beauty” occupies a value of $585 million to her name.

2. Cinderella: The runner-up Disney Princess has a massive worth of $828.04 million to herself. The glass-slipper wearing and friends with mice “Cinderella” is certainly the darling of young girls everywhere.

1. Snow White: Indeed, no Disney Princess holds a candle to the Queen of all “Snow White”. The personification of love, kindness and girlish sweetness, the bobbed black her beauty is worth a colossal amount of $877million.

Leaving the previous maidens stunned is none other than the recent entry in the Disney entrouge – Else from the movie Frozen.

In just 3 months, Else managed to earn $980 million to her name. Ofcourse, helping her was the adorable snowman, Olaf and her cheeky sister Anna.