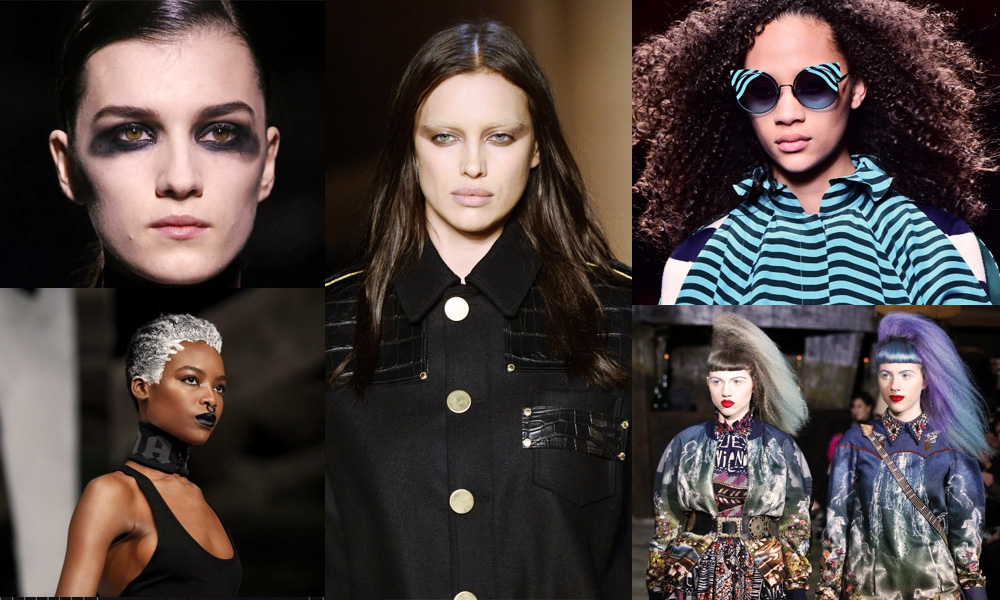 The autumn/winter 2016 ready-to-wear shows have finally drawn to a close, leaving us time to reflect upon the big trends for next season. When it comes to beauty, drama will be key. As urban grunge makes its comeback (at least on the catwalk), so it is only natural that eye makeup becomes bigger, darker and smudgier. In Paris, the look was demonstrated by the thick-winged eyeliner at Saint Laurent that flicked up to the temple and the eyeshadow that filled the models’ sockets at Sacai. The “heavy liner” look was more minimalist but still striking at Topshop Unique in London, whereas the Tadashi Shoji show in New York featured a softer, smudgier take on the trend. Dries van Noten’s show invitations even featured the look, handpainted by illustrator Gill Button. Sleek hair has officially had its day, as designers embraced big, attention-grabbing hair. This could be seen at Gucci in Milan, where the do’s were freshly-washed and voluminous, but more so at Rick Owens in Paris, whose hair nests bordered on the conceptual. The city also hosted Manish Arora, where models’ heads were piled high with crimped, wavy, bouffant locks, while in London Ashish opted for bold wigs that matched the models’ makeup. In a bold beauty move, several brands took to camouflaging or lightening their models’ eyebrows to make the makeup more dramatic. This could be seen at Giamba and Giorgio Armani in Milan, where the brows looked scuffed out, and Givenchy at Paris, where they were bleached so much that they appeared invisible, contrasting with the heavy kohl eye makeup. Vivienne Westwood also tried out the trend in London. The new trend for ‘glam-Goth’ manifested itself in a penchant for very dark, high-gloss lips. Rihanna kick-started the trend in New York with her Fenty x Puma show, where the lipstick was black, followed by Marc Jacobs. Things lightened up in London, where Sibling and Gareth Pugh chose deep red tones, before Dior sealed the deal in Paris with a lacquered black lip. The look could also be seen at Louis Vuitton and Vivienne Westwood in the French capital. Leave the straightening irons at home this fall — designers have been championing the curl for weeks now. Altazurra set things off in New York, with wild curls bouncing down the runway, but the look really took hold in Milan, where Giorgio Armani debuted cute ringlets, Fendi embraced voluminous tight curls and Marni favored a softer, wavy look. Never one to skip a trend, Vivienne Westwood pinned the curls to the models’ heads in London, putting a faintly historical spin on the look.