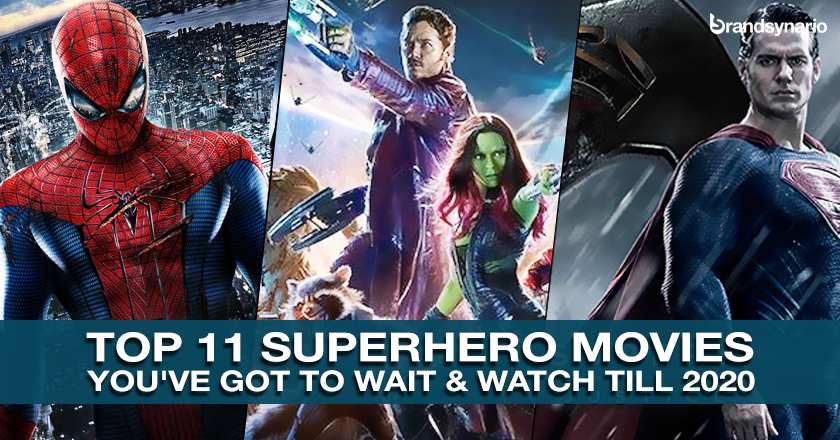 If you are a fan of superhero movies, get ready for six action packed years from your favorite comic franchises! The top film studios Marvel, DC Comics, Fox and Sony are coming up with at least 29 super hero movies in the coming years.

Here are our top 11 superhero picks that you should definitely save your dates for! We all saw the earth’s mightiest heroes come together to avenge the world from Loki back in 2012 in the first movie, The Avengers. The Marvel movie was a super hit from the day it released and the anticipation for the next one, Avengers: Age of Ultron is higher than ever. Releasing on May 1, 2015, the new movie will see the Avengers fighting Tony Stark’s own robotic creations. With Marvel studios giving a hit after hit, DC Comics has a lot to compete with.

Superman and Batman has done quite well on its own hence, the franchise is coming up with the ultimate fight between the two super heroes themselves. It will be released as the sequel for the Superman’s reboot last year Man of Steel. The movie will introduce the character of Wonder Woman, played by Gal Gadot and will bring in Ben Affleck as Batman opposite Heny Cavill. Hugh Jackman stole the show in the X-men: Days of Future Past, the second film in the X-men Trilogy, changing the course of future for X-men by going into the past.

The final movie in the trilogy, X-Men: Apocalypse, set to release in 2016 will feature most of the same cast with a couple of new characters introduced and will focus on the origin of the mutants. Marvel just announced the release date of Doctor Strange yesterday at its #MarvelEvent. The character is going to be introduced for the first time on the big screen and depicts a former neurosurgeon, protecting the Earth from magical threats using sorcery.

What makes the release of Doctor Strange more exciting is the rumor that Benedict Cumberbatch will most likely be playing the titular role! We thinks the Englishman will fit the role of the weird, arrogant Doctor just perfectly.

Guardians of the Galaxy 2 We have yet to meet someone who did not like the Guardians of the Galaxy this year.

The combination of Chris Pratt as the Star Lord, the caring Groot and the hilarious Rocket was just perfectly in sync with a great storyline.

For those who haven’t watched it, do watch it and for those who have and love it, be prepared for its sequel Guardians of the Galaxy 2 in 2017. According to the writer/director of the movie, the main focus will be on the mystery of Star Lord’s father. The most famous female super heroine of all times, DC Comic’s Wonder Woman, is getting her very own solo movie for the first time in 2017. The Amazon princess, played by the sexy Gal Gadot, will be first making an appearance in the Batman v. Superman: Dawn of Justice movie. Third in the Thor series, the movie Thor: Ragnarok is all set for release in July 2017. The movie will depict the situations following the end of the movie Avengers: Age of Ultron. The movie will feature the evil Ragnarok, the cyborg clone of Thor created by Tony Stark, for the first time. With Marvel’s Avengers such a hit with the audience, it was only a matter of time that rival DC Comics released such a superhero team movie too. Justice League featuring some of the top DC Comics superheroes, including Batman, Wonder Woman, Superman and Aquaman, is expected to release in November 2017.

DC Comics is still in the process of re-branding its characters and if all goes well, Justice League might just be able to compete with Avengers, We are loving Grant Gustin as The Flash in the series currently being aired at CW Network and expecting the same level from Ezra Miller who has been taken as the super speedy Barry aka Flash in the DC Comics movie The Flash, slated to release in March 2018.

The storyline for the movie hasn’t been released yet but it will revolve around a police forensic struck by lightning turning into a meta-human. Marvel’s revamped Spider-Man, played by Andrew Garfield, was well received in the first movie of the trilogy but the second movie, The Amazing Spider-Man 2 failed to generate an equal buzz.

There were criticisms not only on the performances of the star cast Andrew Garfield and Emma Watson but the storyline got the brunt from the critics too.

The third instalment of the series, expected to release in 2018, will see Andrew Garfield in the titular role and will introduce the character of Mary Jane, as Spiderman’s wife/girlfriend. Green Lantern starring Ryan Reynolds as Hal Jordan flopped badly back in 2011. However, Warner Brothers and DC Comics haven’t given up on their emerald ring-slinger completely.

Which Green Lantern from among Guy Gardener, Kyle Rayner, Simon Baz or even Hal Jordan will feature in the upcoming venture is still undecided.