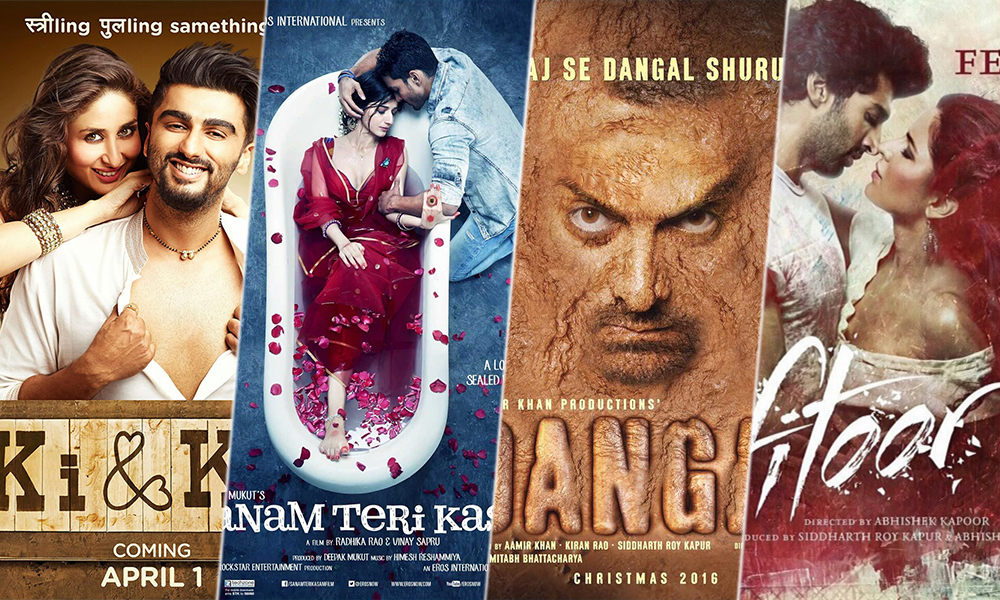 The top 10 Bollywood movies to hit the cinemas this year appear interesting and promising. The movies gracing the cinema this year will belong to quite a few genres and will be casting relatively newer talents as well. From pure action to masti masala to intense biopics and to humorous romantic comedies, these Bollywood movies will have it all this year!

Here is a short list of movies that are completely unmissable this year:

Plot: The romantic film debuts Mawra Hocane and Harshvardhan Rane in a typical tragic tale turned into a love story as the film progresses. The film’s soundtrack appears promising with Himesh Reshammiya behind it. Plot: Fitoor which means an obsession or passion is a romantic drama adapted from the classic Great Expectations penned by Charles Dickens. Aditya, Katrina and Tabbu take up the screen space as leading actors with it being shot in the scenic beauty of Kashmir. Plot: This romantic drama stars Yami Gautam and Pulkit Samrat with the other two big names starring as important supportive characters. The film has been shot in quite a few locations such as Shimla, Mumbai, Ladakh and Kalpa. Plot: Kapoor & Sons focuses on the story of two brothers, one of whom was supposed to come out of the closet. Siddharth Malhotra and Fawad Khan will play brothers in the movie. Plot: This much-awaited film stars Mahira Khan opposite Shahrukh Khan marking her debut film in Bollywood. Set against the 1980’s, the film revolves around a bootlegger played by Shahrukh Khan who is ultimately taken down by a relentless police officer (Nawazuddin Siddiqui). Plot: Another sports-based drama, starring Salman Khan and Anushka Sharma produced under the banner of Yash Raj films is all set to hit the cinemas around Eid this year. It was rumored that Sylvester Stallone would be joining the film yet they were proven untrue. Plot: A film venture between Ashutosh Gowariker Productions and Disney India, this epic adventure-cum-comedy film will be depicting the Indus Valley civilization  in it’s prime. Additionally, A.R. Rehman will be providing the music score for the movie set to be released worldwide. Plot: The much loved musical drama’s sequel will have the same cast as before along with the newcomer Shraddha Kapoor joining the movie. The movie’s music will be provided by Shankar Ehsan Loy where Shraddha Kapoor will be especially singing three songs for the movie. Plot: Aamir Khan’s another acting venture is based on the real-life story of the famous wrestler Mahavir Sign Phogat who went on to  teach the sport he loved so much to his two daughters who later also won a gold and silver medal respectively in the 2010 commonwealth games.

Let’s wait and see how these films fare.