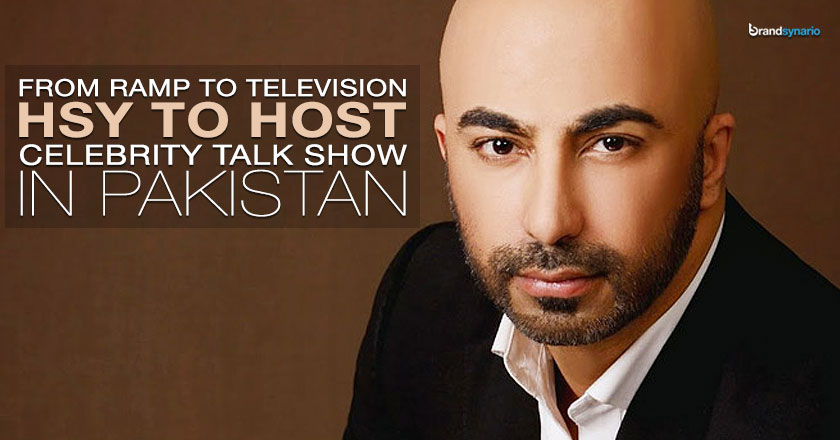 After creating wonders in the fashion industry of Pakistan, the King of Couture and Choreographer, Hasan Shehryar Yasin aka HSY is now planning to start his own celebrity talk show -Tonite with HSY, which is all set to air on Eid.

“I have been offered shows many times before but I never had the time,” says HSY, “I love TV and everyone knows that I love talking, so it seemed like a great time to start this up.”

According to HSY, this show will be an escape from the daily hustle bustle of life and will be a completely different platform for the host and guests to converse in. Currently, he is busy recording and promoting his show.

Here are some sneak peak images from his show:

Throwback to an interview with the dashing Hassan Yasin (HSY) for his upcoming show #ToniteWithHSY. pic.twitter.com/NqrVsjqW5W

While interviewing a guest on my upcoming talk show. #tonitewithhsy pic.twitter.com/K0f9KkugFM

“I am a tea drinker, no koffee for me,” says HSY. Hassan Shehryar Yasin to launch his own talk show.

He claims to not have any ‘rapid fires’ or ‘gift hampers’ on his show, as it’s different from the rest. “My vision is beyond Koffee With Karan. Tonite with HSY will neither be digging for gossip nor will it promote or project upcoming projects, it is a platform for the masses to get to know who our celebrities are and what they think about topics that do not necessarily pertain to their jobs,” says the power packed designer.

There is no set agenda for choosing the guests that will appear on the show. “So long as you’re my friend you’re going to be on the show. You don’t even have to be too famous; just be interesting.”

Fawad Afzal Khan, the heartthrob of millions  posted a picture on Twitter telling the World that is going to be on the show pretty soon too!

Throwback to an interview with the dashing Hassan Yasin (HSY) for his upcoming show #ToniteWithHSY. pic.twitter.com/NqrVsjqW5W

HSY claims that his shtick is to invite two guests, for example, who do not know each other and to watch how well they blend together in just sixty minutes.

Let’s wait and watch this glamour packed hour and hope HSY is as charismatic on camera as he is on the ramp.