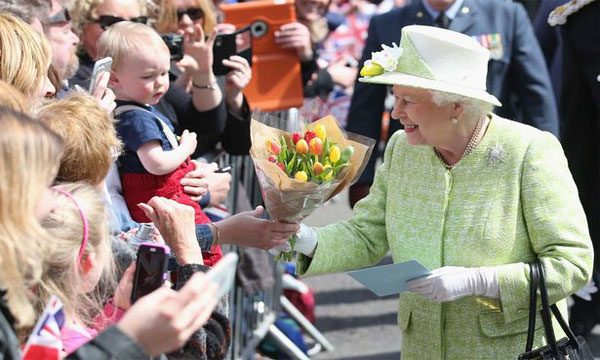 Thousands of people gathered in the rain for a street party outside Buckingham Palace on Sunday, part of a weekend of celebrations to mark Queen Elizabeth II’s 90th birthday. But guests insisted that the downpour would not put a dampener on the event.

“Rain won’t spoil the party,” said picnicker Noreen Chisholm. “Everybody is so happy to stand in the rain to be part of the queen’s birthday.”

“The British spirit will come through the rain,” added fellow guest Andy Moor.

Around 10,000 people attended the Patron’s Lunch on The Mall where the queen gave a short speech thanking them for their birthday wishes and joked about the length of the festivities, which have spanned several months.

A smiling queen, dressed in fuchsia, and her husband Prince Philip emerged from Buckingham Palace after the rain had stopped in a chauffeur-driven, open-topped 4×4 to wave at crowds who lined The Mall to see her.

Briefly addressing the crowds to thank them for their good wishes, she added: “How I will feel if people are still singing ‘Happy Birthday’ in December remains to be seen.”

Guests dined on hampers containing sandwiches, snacks and puddings from British producers, while adults even got a can of Pimm’s, a fruit punch popular at summer garden parties in Britain.

“The queen at 90 is the only head of state that world leaders can turn to for a first hand perspective on the arc of history over the last six decades,” he said.

The not-for-profit picnic event brought to an end several days of celebrations to mark the queen’s official 90th birthday, which began on Friday with a special service at St Paul’s Cathedral in London.

On Saturday, the queen took the salute at the Trooping the Colour military parade which drew a crowd of thousands.

After Trooping the Colour, members of the royal family gathered on the balcony of Buckingham Palace to watch a military flypast, including Prince William and his wife Kate, plus their young children George and Charlotte.

At least 1,000 smaller street parties were also expected to take place across Britain to mark the birthday.

Each year, the queen celebrates two birthdays as part of a royal tradition which dates back over 250 years.

The actual date of her birth is April 21, 1926 but her official birthday is also marked in Britain on a Saturday in June.

This year, her 90th birthday celebrations started on April 21 with the lighting of 1,000 beacons around Britain.