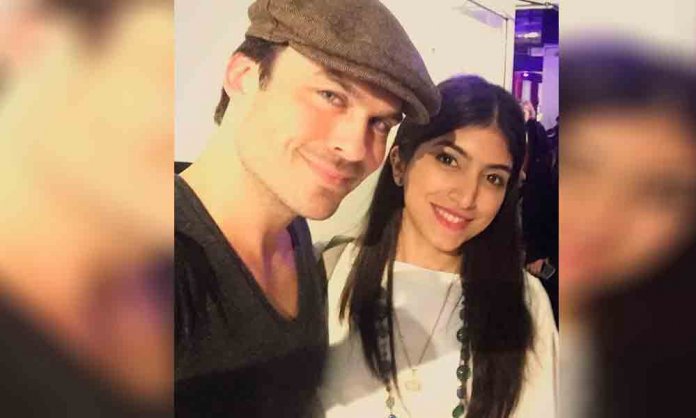 It’s not an everyday thing that you end up sitting next to one of your favorite celebrities.

But if it does happen, you try to make it memorable, and yes, take a lot of selfies.

Which is exactly what one girl did when she got an opportunity to meet with Vampire Diaries famed star Ian Somerhalder.

Well, we all are feeling jealous now!

Recently, a Pakistani based filmmaker, Halima Tariq, was invited as a speaker at the reception dinner hosted by Connecther and the Ian Somerhalder Foundation (ISF).

The event was attended by a number of international filmmakers and celebrities like Ian Somerhalder, Nikkie Reed, Abigail Disney, and Khalida Brohi to name a few!

Halima got an opportunity to get introduced to Ian Somerhalder personally and hey, we know it’s a big deal.

I was introduced to various individuals present at the dinner reception who were involved in social work and raising funds for their causes through Connnecther.

She further talked about how she was given an exceptional opportunity to convey her message with such influential personalities who appreciated her concept.

I spoke about my journey as a filmmaker, and how Connecther and the platform provided by the Girls Impact the World Film Festival has been such a vital part of who I am today. It was through them that I discovered the courage to cement my passion for filmmaking and the desire to affect change through my films.

And Here’s The Million-Dollar Picture We Bet Halima Will Cherish For A Lifetime!

Zaid Ali Trolls His Wife on Instagram & it Was Romantic!