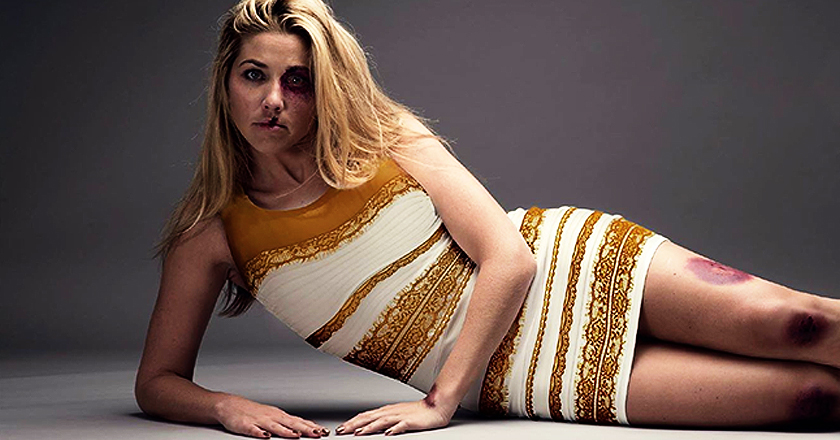 #TheDress recently became one of the most successful examples of turning a random trend into a globally viral marketing campaign. Now, the Salvation Army of South Africa has given the idea of the same marketing strategy more meaning and used it brilliantly to convey a powerful public awareness message against domestic violence.

The public awareness ad launched by the Salvation Army shows a woman, subject to domestic abuse, covered in blue and black bruises, scrapes and cuts, wearing the now popular Roman Originals dress in the white and gold version. The way the woman is sprawled across the ad image, staring boldly at the camera is in stark contrast with the way her body has been a subject to abuse. The idea is to see the reality behind the defiant attitude and understand that it is not the cause of her unfortunate situation or that she deserved being treated so brutally.

The headline of the ad says, “Why is it so hard to see black and blue?” followed by “The only illusion is if you think it was her choice. One in 6 women are victims of abuse. Stop abuse against women.”

While the world argued about the insignificant issue of the difference of the color of a random dress in a random photograph, the Salvation Army brilliantly used the virality of the ad to grab the attention of all.

We see almost all brands capitalizing the virality of ongoing trends for their promotions all the time but it is refreshing to see the same trends being used for a good cause. The advertisement has received a great response around the world considering that #TheDress received undue attention while actual issues like violence and poverty are so easily disregarded.

In a country like Pakistan, where domestic abuse is quite common yet blatantly ignored, the ad is a perfect way to tell all those who can protect others to see beyond the white and gold illusion and perceive the jarring blue and black reality.