Home Articles The ugly truth of how to get famous
Advertisement 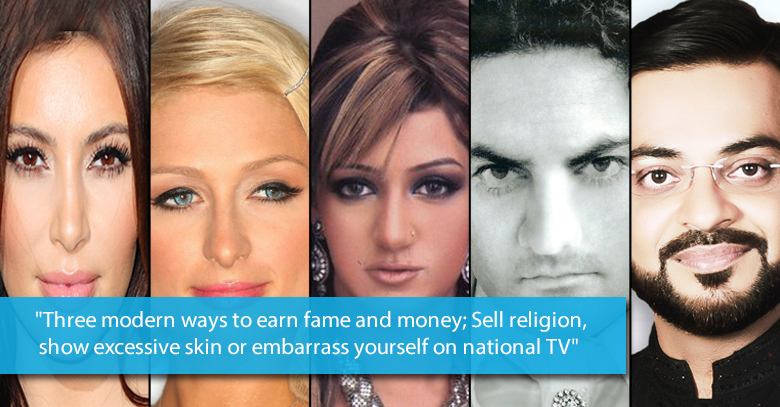 Of all the things human beings have craved throughout time, fame remains to be on top amongst money, attractiveness and maybe power. History has seen people kill and get killed in the struggle to get some or all of these qualities.

One of the more common questions that come to pass hence is, How to get instantly famous? Well, there was a well-established answer to this primitively, the three audacious ways – perform an art with your ‘soul’ like Led Zeppelin, David Copperfield or Bob Dylan, salvage human lives like Gandhi, Marin Luther King, Malcolm X, Jinnah or Abraham Lincoln or invent, discover or philosophize like Socrates, Plato, Tesla, Descartes, Newton, Edison, Einstein or Fermi.

Fast forwarding to present day, gives birth to doubts in every discussed idea so far. Speculate the ‘famous’ around you today. And ask the unpretentious question, why on earth are they famous for?

Seemingly, the three modern ways of getting instant fame today are; show excessive skin in the most audacious manner, exhibits are; Miley Cyrus, Lady Gaga, Kim Kardshian or Mathira – or embarrass yourself in front of millions, like Tahir Shah and.. Well, he is one of his kind in when it comes ridiculing one’s self in front of millions or choose the one road to fame which everyone sees but less observe and even lesser choose to walk on; sell religion.

Consumerism might be one of the reasons that we have come to pass these visual immoralities in the name of art. Besides, who can deny that the overall Intelligence Quotient of human kind is declining severely.

But the question remains, why? where did we lose track of imaginative intellect or even humility?

A mother once asked me, “Can you honestly tell me son, looking in my eyes that you would be as open-minded about your daughters acting like Kardashians or Hiltons or any other utterly repulsive woman, as you are watching them on television?”

If not, then why have we allowed this ethical menace to wander into our daily lives? Is that intentional or are we really that indifferent about what are children will grow up watching?

It won’t be wrong to say that 21st century has already produced some of history’s worst artists, musicians, magicians and actors but as the digital era prospered everything and everyone got connected.

Globalization resulted in information pollution, which in turn pushed human attention to fall extinct. That is what originated the malicious strategies to overcome the scarcity of attention, ever since then outrageous became the new artistic.

These people have done nothing substantial to earn the fame they have. People watch them, because people are interested in watching other people’s lives, especially celebrities. Don’t agree with this? Look at the show Big Brother (or Big Boss), millions watch it, and all it has, is a bunch of people living in a house.

Anyone with a half decent tone of voice and a salesman personality can host our most sacred religious TV shows.

Why do we let them dictate our moral terms? What have they done to earn the trust and ‘love’ we give them? Because they are seasonal jackpots for the television company’s they work for? Or is it because they hand out millions of rupees worth of products hijacking a holy month, all in the name of advertisement?

Do you honestly believe them to be this generous if there had been no viewership? Or if they had to pay a single penny for the things they donate publically in the name of almighty ‘TRP’?

Indeed we have let our solitude to be put out for sale, so that people like Aamir Liaquat and Junaid Jamshed can earn money from them for their Lords – the TV Channels. There is nothing wrong with doing business or making money, but there is everything wrong when it is done under the name of religion. Differentiate between morals and occupation, people!

We have kept our silence when art became a money making industry, we did not budge when religion slid the same slippery slope but let us at least remember our sins and immoralities. Let us remember that it has been for these reasons we have been cursed with these celebrities.