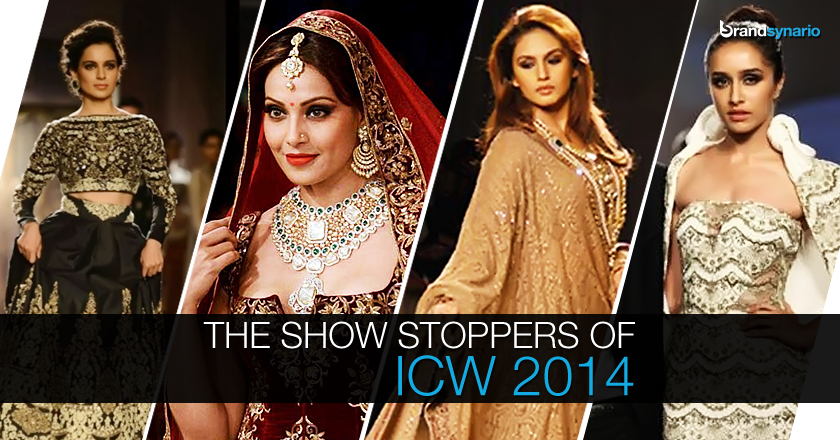 Inspite of immense creativity and diversity in designs, Shree Raj Mahal Jewellers India Couture Week 2014 was taken over by the presence of Bollywood’s famous celebrities.

The event started on July 15th, where Rani Mukherjee did not only rock Sabyasachi Mukherjee’s show but also became the center of attraction.

Mukherjee portrayed his imperial collection ‘Ferozabad’ and left everyone awestruck, but his designs could not diminish Rani‘s star power, who sat in the front row to support her friend and patron.

Even on the second day, the film stars continued to grab everyone’s attention with Bollywood’s current member Nimrat Kaur and the very glamorous Malaika Arora Khan who walked the ramp for Rina Dhaka.

The Forth day was followed by Kangana Ranaut who marched diligently on the ramp as the showstopper for Anju Modi. The designer presented a combination of ethnic Indian collection “Manikarnika”.

Famous for ‘Aashiqui 2’, actress Shradha Kapoor too, glided in Gaurav Gupta‘s garment as his showstopper.

When inquired why designers have invited Bollywood faces, Dhaka said: “It’s not so much about our love for movie stars, it’s about driven situation. Yes, the movie stars help sell the garments too.”

For the finale, beauties like Bipasha and Chitrangada Singh walked the ramp and singer Kamaal Khan‘s performances on tracks like “Afrin”, “Ishq Sufiana” and “Mein tenu samjhawan” stunned the audience and proved to be a complete package