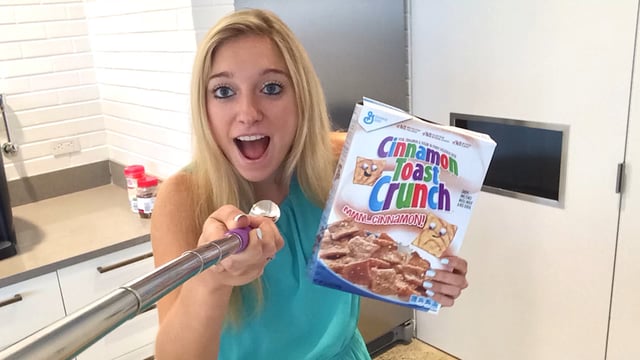 All you budding food photographers and die-hard selfie addicts, rejoice! The world has welcomed the “The Selfie Spoon”, ending all your troubles to get that perfectly framed picture while you are eating and chilling with your pals.

Fashioned by the General Mills brand Cinnamon Toast Crunch, the selfie-spoon apparently takes the art of taking selfies to a whole new level.The stick with a spoon lengthens as high as 30 inches and sports a clamp at the end to fasten your smartphone.

What’s more, it comes with a Bluetooth enable remote so that you can easily Instagram, Snapchat or Tweet every munching moment. In a marketing campaign, Cinnamon Toast Crunch launched this innovation with the aim that their cereal lovers will enjoy to pose and capture while eating their breakfast. I can’t believe it, but yea I should this is #America and the #SelfieSpoon is sold out, @RobinMeade @MorningExp free, is the keyword though

Oh no! I just tried to order my #selfiespoon but they are already sold out! There’s a fresh batch being released tomorrow. I gotta be on it! — Michelle Lewis (@Michelle_Radio) September 21, 2015

I actually need a new selfie stick because I used mine so much this weekend it BROKE! #TrueStory #SelfieStick #SelfieSpoon

Can’t wait to flaunt your food adventures this Eid-ul-Adha with your friends via the Selfie Spoon on social media? Well then, you can order this piece of innovation for free on SelfieSpoon.com, The ordering process requires you to pay charges for handling and shipping.