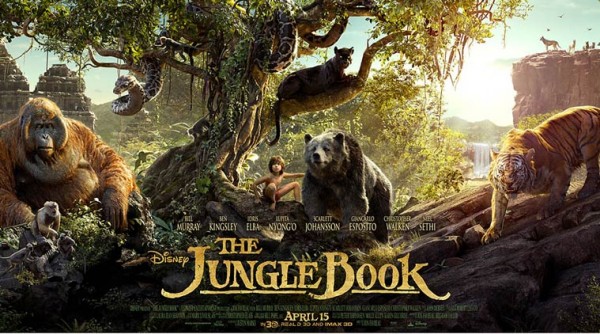 The ageless Disney property and every child’s much-loved timeless favorite, The Jungle Book Movie is a glorious makeover by Jon Favreau in his adaptation of Rudyard Kipling’s classic magnum opus. We bet there will be hardly a soul who will not fall in love all over again with the menacing jungle, the feral boy Mowgli and his sinister animal friends.

Beginning a tad bit different from the original legend, the movie is sans the scenes of a baby lost in a boat and found in a basket. Fast-forwarding the tale to ten years, you will welcome the protagonist all grown and shabby, living the carefree forest life with the panther Bagheera and his family of wolves. But as the jungle is hit by a dry spell, the natives of the natural kingdom call for a water truce. The most dominant of all, the self-proclaimed tiger king Sherkhan demands that the man-cub should be given to him as per the decree of the jungle. He warns that he will destroy the wolves if Mougli does not become his feast. Amidst fear for the boy’s life, Bagheera takes the mission of safely transporting Mougli to a man village. From here begins the famous bone-chilling adventures of the jungle boy and the laid-back papa bear Baloo, the vivacious serpent Kaa and the crazy King Louie. What makes the story rise and shine is the sheer brilliance of visuals. The tech-magicians of the movie have crafted a masterpiece of live-actions with breathtaking Computer Generated Imagery and 3D Photography.

It is the eye-popping technical perfection in the movie that will put you in awe of the slushy jungle and the dark, talking animals. The movie no longer seemed like a cute childhood tale but a saga of cut-throat survival.

Even more overpowering are the phenomenal voice-overs, bringing everything to life as it should.  Both the Hindi and US versions of the tale have a stellar voice cast and have served well with the characters. The Hollywood reiteration is complete with melodies of Bare Necessities and I Want To Be Just Like You. Similarly, the Hindi movie has revived “Jungle jungle baat chali hai pata chala hai… Chaddi pehen ke phool khila hain”, something kids will love humming for days.

Certainly, there isn’t a dull, dreary instant in The Jungle Book, a movie not just for children but equally entertaining for kids. Definitely, the contemporary cinematic class is not something to be missed!

The movie was released in India on April 8th and the premier was one star studded gala attended by the likes of Salman Khan and Vidya Balan. Here are a few tweets from the who’s who of Bollywood, sharing their reviews of the movie.

Mowgli we welcome you to the Man Village 👏😋!! pic.twitter.com/UHP7F9HvKt

#Junglebook a film which is more than a Film 🙂
Aftr Sholey this where I luv so many characters.
Story of selfless love, true grit &courage.

Just got out of @Jon_Favreau @TheJungleBook
It's was just another level of outstanding, exciting and adorable!
Going back to watch it again

The movie releases in Pakistan on April 15th. Watch the trailer for Jungle Book below.