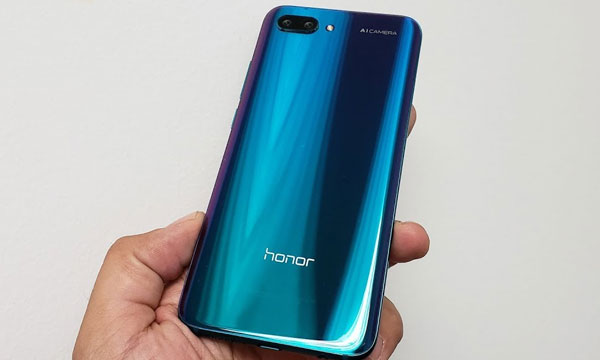 Honor introduced its 2018 flagship device in the shape of the majestic Honor 10. It comes equipped with great specifications and features only for RS. 55,999, it has been nicknamed the flagship killer.

The Honor 10 provides spectacular AI cameras, a full view display experience, long-lasting battery with supercharge technology and even comes with the custom EMUI 8.0 Now let’s watch the video for a more in-depth analysis

The version of the Honor 10 we had was the phantom green. With an aurora-glass body, it shifts color from every angle ranging from green, blue and purple. It is definitely the most eye-catching phone we have ever experienced.

They have also introduced a fingerprint sensor under the display rather than on the back of the device. This new ultrasonic fingerprint sensor is placed under a thin layer of glass and is extremely fast and more secure than your conventional scanners.

The Honor 10 comes with a built-in notch display which also houses the front camera. What we really liked is the fact you can toggle between the notch display, so if you are not a fan you can always turn it off. The device features a 5.84-inch display, 19:9 aspect ratio and 1080 x 2280 pixels screen resolution.

The Honor 10 has a crisp, bright and sharp display which displays colors clearly and vibrantly. You can also lower the resolution to save battery which is used to save battery.

The Honor 10 has a stunning 16MP + 24MP Dual AI Camera which performed much better than its initial expectations. The cameras ability to capture minute details and its adaptability to various environments make it a unique phone.

One of the most interesting features of Honor 10 is its capability to shoot moving objects with finesse in its Pro Mode. There was a time when adjusting shutter speed in bright places was not an option for mobile users as it used to make the picture overexposed but now with the Honor 10, we can lower the exposure and the shutter speed to capture the image of a moving object.

Photos taken with the RGB sensor are excellent in terms of overall quality and details. The Honor 10 solves the issue of over-saturation, the colors are natural and the white balance is also accurate.

The AI mode on the Honor 10 also trumps other devices like the Huawei P20 Pro and Mate 10 Pro. Both above-mentioned phones took it too far with the AI image enhancements. Colors were overly saturated and mode detection contained bugs.

However, the Honor 10 seems to have fixed these issues and doesn’t overdo most of the settings. While the photos do look different from their non-AI counterpart they have become more natural and the artificial aspect of the picture is adjusted to optimal standards.

Honor maintained impressive levels of processing power with the Honor 10. Equipped with the HiSilicon Kirin 970 chipset along with 4GB of RAM and 64/128 GB internal storage, the Honor 10 provides top of the line performance.

Applications opened and closed in milliseconds and general navigation throughout the UI was smooth. Gaming on the Honor 10 was a treat as the frame rate was high and stable.

Multitasking was also fine most of the time though I think a 6 GB RAM option for the Honor 10 would be brilliant as EMUI could be handled better.

If you want a phone that looks beautiful, gives amazing performance and lets you take professional level pictures, then Honor 10 is the phone for you. The device’s battery may not last too long for the power users but the Supercharging feature more than makes up for it by charging the phone up to 50% in under 25 minutes..

Overall, the Honor 10 is an excellent flagship device, especially given its price. Available for just Rs. 55,999, it offers a processor from a phone that costs almost twice as much, an excellent camera, great screen display, and an eye-catching and unique design.

Some “mid rangers” are priced at around Rs. 50,000 so when you put the Honor 10 in between them, it definitely stands out as the best value for your money.