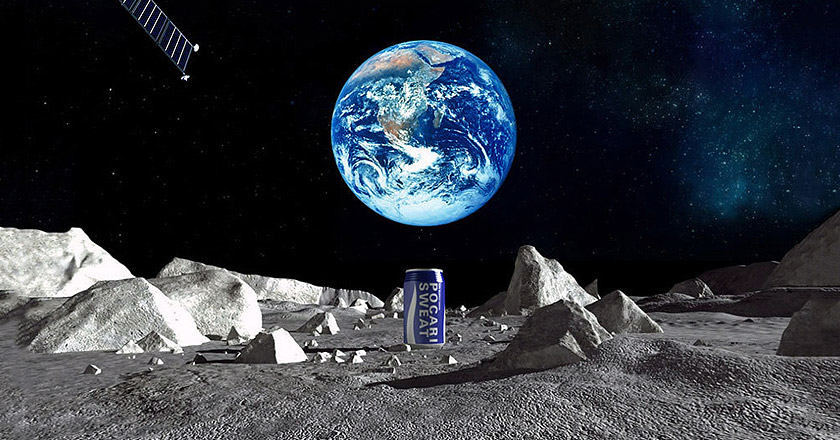 The U.S.A flag that the astronaut Neil Armstrong fixed on the moon is not going to be alone on the satellite anymore; as Japanese sports drink “Pocari Sweat” will soon be landing on the moon to give it some company.

First time in the history of the world Otsuka Pharmaceutical Co. will launch its branded can of the popular sports beverage on the moon in October 2015, becoming the only commercial drink till date to successfully make its way to a celestial surface.

Named as the “Lunar Dream Capsule Project”, Otsuka plans to send a titanium time capsule filled with the powdered Pocari Sweat, aboard a rocket to our nearest neighbor in outer space.

The 1 kg, Pocari blue shaped “Lunar Dream” canister will also be inscribed with messages of around 38000 children from all over the world.

The project is being executed with a joint contribution of US Astrobotic Technology and the Singapore based Astroscale.

Apparently, Otsuka expects that their extraterrestrial publicity stunt will inspire young children to pursue their dreams of traveling the 384,000km trip to the moon one day and consume the powdered Pocari Sweat with lunar water.

However, it seems that Otsuka is gripped with the idea of space advertising for a video commercial for the same sports drink that had been recorded back in 2001 for promotion.

Nonetheless, this is not the first time a beverage brand has used a space stunt for marketing. Tang has the honor of making its debut in space by accompanying NASA’s astronauts to celestial missions, experiencing a dramatic boost in sales.

While the name of Otsuka’s sports beverage may sound really unappetizing to some due to the term ”sweat”, but it’s famous as the “Gatorade of Asia” and is highly popular in Japan.

Seemingly, now advertising on earth is way too mainstream and in the upcoming years brands will pursue the path of actual space ads.

It’s kind a sad to know that a bottle of powdered sports drink will land on the moon before any of us, lets just wish that it at least has a long enough expiration date for us to enjoy if we ever make a trip to the lunar land.