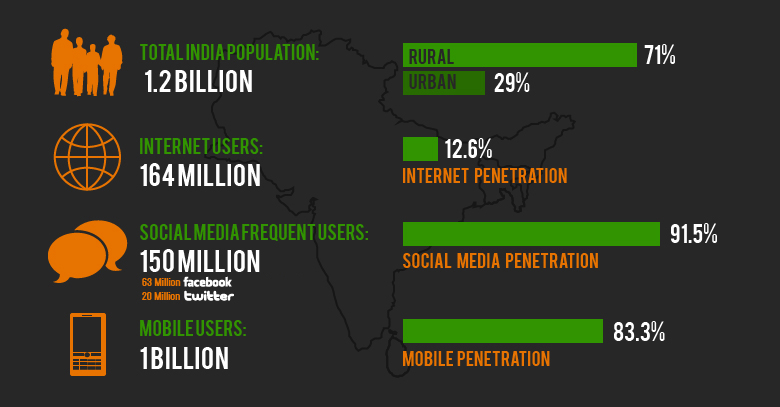 India,  home to a population of more than 1.2 billion inhabitants, is appearing on the digital map as one of the fastest emerging markets for technology and innovation. A country known for its exemplary heritage and hard working individuals is now representing a cultural shift, assimilating technology in its roots.

With such change stimulated across all directions, digital traffic of India is one of the significant indices that is catching global attention. Internet traffic trackers , locally and globally, are revealing facts and figures, that highlight the momentum of India’s population towards becoming ‘digital’.

EFFECTIVE MEASURE COMES ON BOARD

Effective measure piloted its research on India with extracting relevant information from 55,000 demographic profiles of India, attempting to highlight the dynamics of the population under the umbrella of digital media. Delving step by step from the basics to the specifics, the research revealed figures that vocalize the Indian movement towards digitization.

As per the research of EM, 55 percent of the Indian population, from the sample of 55,000 profiles, were married, clearly representing the affinity towards matrimony embedded in the culture. However, when the researchers mined further into the child birth rates, the results were quite astonishing.

This comes as a surprise for many, as India comes under the league of countries famous for having a high rate of childbirth. These facts also draw a question over the country’s high population being attributed to migration or other related factors.

The research further highlights that 18 percent of the sample population resides in Maharashtra, where the cosmopolitan hub, Mumbai, is situated. The city along with the state is known for hosting the business arena of the country, with Mumbai contributing around 25 percent to the industrial output of the country according to the Times of India (TOI).

WHAT STIMULATES DIGITIZATION IN INDIA

Tapping the specifics, EM discovered that 77 percent of the sample population had the privilege to graduate from a university. This provided a strong backing to the digital media trends observed by the research group.

Another interesting finding that confirmed the influence of digital media in the country was that 21 percent of the population worked in IT and communications. This surely contributes to the creation of opportunities and advancement in the technological arena.

With ample percentage working in the IT sector, it is very likely for the masses to get tech savvy. Even the 11 percent of population that serves the manufacturing sector and 10 percent that moves to financial/insurance services need to adapt to digital media to give their best shot.

The statistic that undoubtedly became the higlight of the entire research was that 51 percent of the entire sample population accessed the internet via their mobile phones.

This immediately takes us to the recent Airtel ads that feature a liftman asking a dweller for adding him on Facebook, and a housewife offering her cell phone to a corporate woman to send an email.

The Internet tariffs for the Indian cellphone users are as low as Rs. 1 per day, stimulating the usage of mobile phones to access internet.

COMSCORE BACKS UP THE FINDINGS

ComScore, another global leader in internet traffic measurement, prepared a report entitled 2013 India Digital Future in Focus. The results of this report clearly support EM’s findings, with the Indian population having 73.9 million home and work internet users, ranking as the 3rd largest internet using population after China and US.

The study further revealed that the Indian blogging audience has reached a massive 48 percent, with 26 percent of category traffic using mobile phones and tablets, hence supporting another statistic of EM’s research.

EM also came up with a holistic picture of the ‘digital India’, informing about 88 million unique browsers, whose stay on average for 6 minutes per visit, and view around 3.3 pages every time they visit the internet.

Such breathtaking statistics surely clarify us one thing. The  Indians are determined to become the dwellers of the nation, that leads the march of technology and innovation.