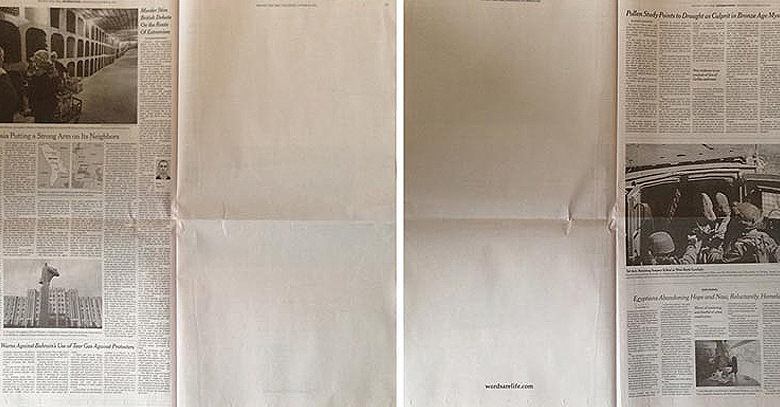 For the first time in 162 years of its existence, the New York Times published two completely blank pages in its October 23rd edition. The Blank pages are no printing error, rather an imaginative promotion for the upcoming movie ‘The Book Thief’ from the 20th Century Fox.

The marketing team behind the movie, adapted from the book ‘The Book Thief’ by Marcus Zusak, came up with the idea of two blank pages – with only a URL of the movie’s official website at the bottom of the page, along with the usual Time’s logo, date and page number on the top – portraying the underlying message of the creative ad campaign, “imagine a world without words”.

It is worth noting here, that a single full-page ad in the New York Times costs in a range of USD 100,000 – two pages would imply twice the cost, naturally. Official spokespersons for the newspaper however did not comment on the matter.

Paying more than US$ 200,000 for a couple of blank pages that may or may not convey the idea would seem like a risky strategy. Nevertheless, Senior Vice Presidnet 20th Century Julie Rieger believes that the empty space in the world’s leading newspaper would generate mystery and word of mouth that the marketing team required.

The Ad, for now at least, has done wonders online, getting an overwhelming response on Twitter and also on Poynter.

As marketers seek to figure out the cost-result feasibility of the advertising venture, one thing can be stated with absolute certainty that not only is the ‘mystery blank pages ad’ brave but also quite captivating.

“The book Thief” is a novel by Australian Author, Marcus Zusak. It revolves around a little girl’s relation with her foster parents, her neighbors and a Jew fist-fighter who comes to refuge in their house when the World War II intensified. Narrated by Death, the Book is set in the time era of Nazi Germany.