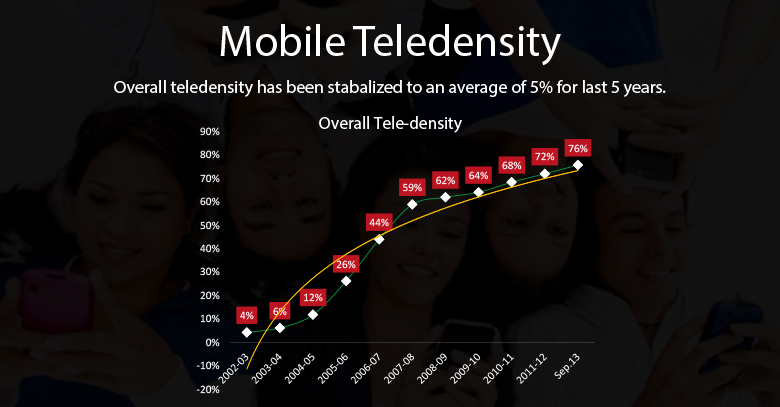 The fastest growing sector in Pakistan, Telecommunication has now reached to its maturity in 2013.

The infographics made by our research team explain the evolution, growth and the current telecommunication market situation in Pakistan

Mobile tele-density is a term used for the number of mobile phone connections for every hundred individuals living within an area. Telephone density for a nation is closely connected to per capita GDP of the area.

Pakistan has emerged as one of the fastest growing mobile markets among the developing nations. This year the sector grew by 5% whereas average growth rate in last 5 years has been about 5% too.

Talking about individual operators growth, Warid gained highest consumer base of about 856% in 2005. The conversion of Paktel to Zong caused the shift of 286% consumers from other networks and new consumers were added as well. Where zong continue to gain its subscribers (54% in 2012), Warid has lost upto 22% users.

In last 12 months, Mobilink consumer average is adding about 100,000; Zong upto 300,000 and Warid is losing about 70,000 consumers per month on an average. Currently Mobilink has the highest subscriber base comprising of 36.7 million and U-fone with 23.8 Million subscribers.